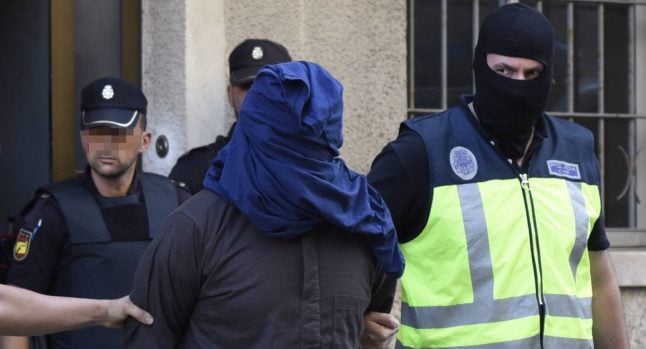 A man arrested by officers raiding a building in Mallorca early on Wednesday. Photo: Policia Nacional

It is believed that the man – named as Moroccan Abdulkader Mahmoudi – was poised to carry out an attack using a knife to stab people, following the modus operandi of the recent London Bridge attacks in which 8 people were killed and more than 40 injured.

In this way he intended to “realize his plan to become a martyr,” said Judge Santiago Pedraz, the National Court magistrate charged with investigating the case against the suspected Isis cell as he ordered them to prison.

The attack was planned for Inca, a small town in the northeast of the island that is popular with tourists during summer.

Last Wednesday saw the arrest of four men in Mallorca as well one in Germany and an imam, suspected of being the spiritual ringleader who was arrested in the UK.

Tarik Chadlioui, 43, was arrested in Birmingham on the request of Spanish police who believe he used YouTube videos to recruit and lead an Islamic State group terrorist cell based Mallorca.

The group are accused of belonging to a cell linked to the Islamic State that was involved in “spreading propaganda, indoctrinating and recruiting new members to carry out terrorist attacks”.

Spain has maintained a level four security alert out of a maximum five since June 2015 and has boosted police presence at busy tourist spots such as airports and train stations as well as hotspots during fiestas and large gatherings such as WorldPride, which is currently underway in Madrid.