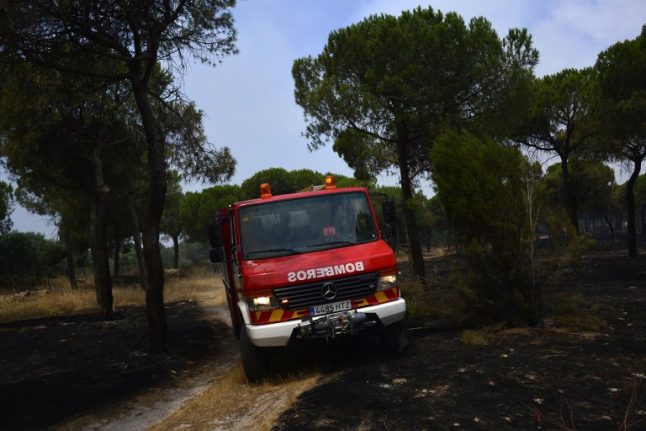 Authorities were sending additional firefighters to tackle the flames at the Doñana Natural Park in southwestern Spain near Huelva, a fire service spokesman told AFP. “The flames are not under control, they are spreading,” he added, though no injuries have been reported.

The blaze comes a week after wildfires killed over 60 people in neighbouring Portugal.

Strong winds and scorching heat were complicating efforts to fight the blaze, which broke out Saturday near the town of Moguer, officials said. The fire has not yet hit the neighbouring Doñana National Park, which has been a UNESCO world heritage site since 1994 and is well known for the extensive biodiversity of its dunes, wetlands and woods.

“The flames have not reached the national park,” the official in charge of the environment with the regional government of Andalusia, Jose Fiscal Lopez, told Spanish public television.

“A special effort was made during the night on the front which threatened the park the most,” he added. The national park is one of Spain's most important wildlife sanctuaries and a popular tourist attraction.

It is home to a variety of animals, including endangered species such as the Spanish imperial eagle and the Iberian lynx, a large cat found only in Spain and Portugal.

Officials temporarily evacuated a lynx breeding centre on Sunday as a precaution. A female Iberian lynx died at the Acebuche captive breeding centre on Saturday “due to stress” during its capture for evacuation, the centre said in a statement.

The other lynxes are “safe and sound”, said the mayor of Moguer, Gustavo Cuellar. “Each lynx held in captivity is receiving detailed care.”

Over 200 firefighters backed by 15 vehicles and seven planes were battling the blaze on Monday morning, emergency services said. The cause remained unknown but Fiscal Lopez said officials were “certain” human activity played a role.

“It remains to be seen if this was with (criminal) intent or due to negligence,” he added.

The fire prompted the closure of several roads and the evacuation of some 2,000 people, including guests at camp sites and several hotels. There were no immediate details on how much land had been burned so far.