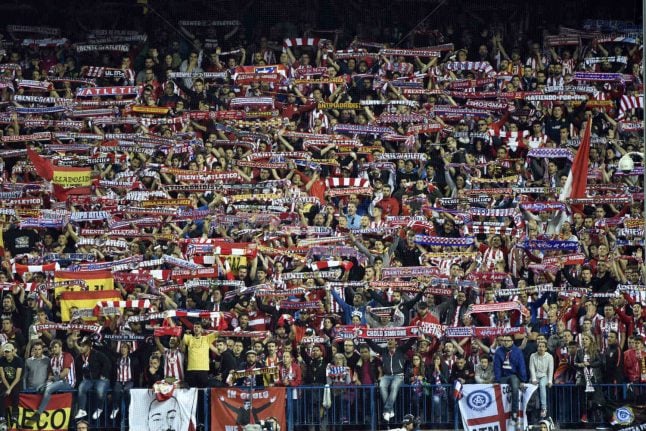 “First, they refused to take their showers with me,” says Jose Manuel Garoz, who was sidelined from his amateur local team in his teens when his co-players found out he was gay via social networks.

“They provoked me all the time and we argued. We came to blows and the president decided to kick me out,” the young man, now 22, remembers as he stands next to a football pitch where he now plays in a “gay-friendly” Madrid club, GMadrid Sports.

A world leader in LGBT rights, Spain became the third country to authorise gay marriage in 2005 and Madrid is now hosting the WorldPride, one of the biggest celebrations of lesbian, gay, bisexual and transgender rights.

But homosexuality remains a taboo in the professional football world.

“With around eight percent of the population gay and lesbian, it's not normal at all that there are no overtly gay players,” says Paco Ramirez, president of Spain's Observatory against Homophobia.

He believes this is because they fear it will “affect their career”.

“For a player to dare come out under these circumstances, there is no assurance that sponsors won't drop him,” adds Julien Pontes of the French Rouge Direct collective, which fights homophobia in football.

Just several months ago, La Liga boss Javier Tebas said that the league “would not allow any bad-mouthing from a co-player, the public, the media” if a footballer revealed he was gay.

The clubs also promise they would support any player wanting to come out.

“If someone wants to freely express his homosexuality, there is no constraint in our club,” a management source at FC Barcelona told AFP.

And Atletico Madrid's French star Antoine Griezmann told men's magazine Icon: “If I were homosexual, I would say so. Even if it's easier to say this when you're not.”

But despite this, no player has taken that step.

“In the football world, homophobia is everywhere,” says Jesús Tomillero, a referee who has been the victim of death threats for denouncing homophobic insults aimed at him.

“People think that football is for machos, that a gay man can dirty this image,” the 22-year-old says.

Homophobic insults are common in Spain's stadiums, used to discredit opponents regardless of their alleged or real sexual orientation.

Several generations of players have been at the receiving end, from Spain's former midfielder Guti to Real Madrid's star striker Cristiano Ronaldo, as well as coach Pep Guardiola.

“Why don't we condemn this? The referee doesn't write it up in his match report. There is inaction from all those involved in the sport,” says Ruben Lopez, in charge of sporting issues at the Spanish LGBT Federation.

READ ALSO: Calls for Murcia leader to step down after reports of neo-Nazi violence at gay pride

Acts targeting LGBT are not counted separately and a parliamentary initiative seeking to specifically include gays and lesbians in a law against intolerance in sports has yet to be adopted.

“The sporting world will gradually progress, but it will still take many years,” says Tomillero.

Some recent initiatives have had an echo.

In 2015, some players started lacing their football boots with rainbow laces — the colour of the LGBT cause.

One of the shirts worn by players of Madrid's Rayo Vallecano, now in Spain's second division, sports a rainbow-coloured strip to fight discrimination.

And since 2016, La Liga publishes a guide recommending “zero tolerance” of discrimination.

But Spain is nevertheless still behind compared to countries in western and northern Europe, activists say.

“Did the laces have a real impact in the football world?”, asks Lopez.

“We don't know. In any case people in stadiums continue to shout 'maricon'.”