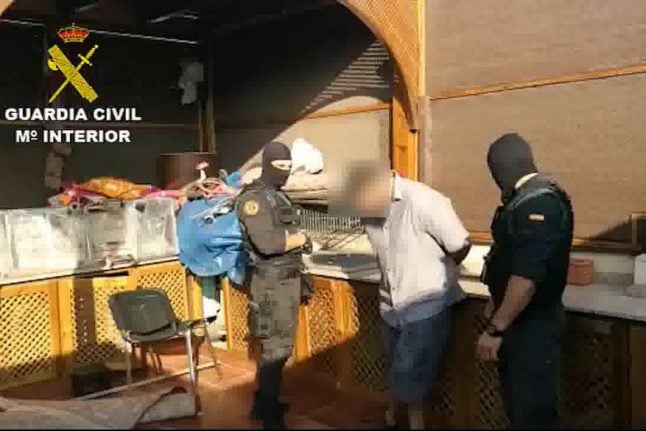 Screenshot from Civil Guard footage of the arrest.

The Spanish Interior Ministry reported that the 40-year-old Danish national of Moroccan heritage had been linked to a network that recruited for groups like Isis and AQIM (Al-Qaeda in the Islamic Maghreb).

The man, identified only by the initials M.E.M., had used a network of shell companies to hide large sums of money in order to help finance a recruitment network for terror groups, according to investigators.

The Civil Guard had been looking into various residents of Melilla since 2012 who lacked basic economic training, but somehow reported holding high-ranking positions of responsibility at companies registered in Denmark.

This investigation led the agents to M.E.M., and ultimately to the discovery that the recruitment network he was helping to finance had international reach and was “probably the most active network broken up” in Spain, according to the ministry’s report. The group had sent at least ten recruits to conflict zones, including people from Germany, Denmark and Spain.

Earlier this week, the Civil Guard arrested three suspected jihadists in Madrid, one of whom they described as “extremely dangerous” and who they said appeared to fit the profile of “terrorists recently implicated in the attacks in the United Kingdom or France”.