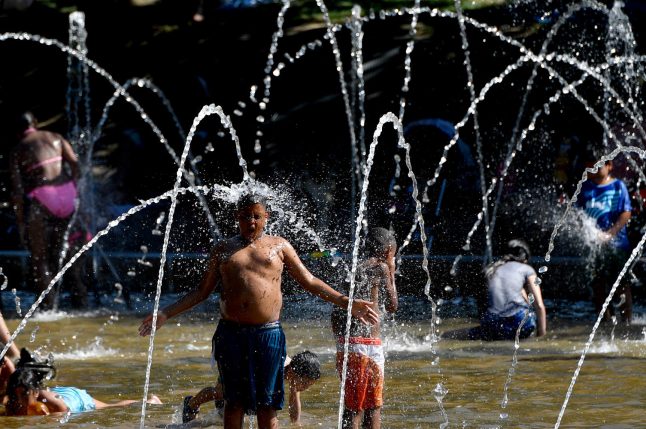 A boy cools off in a fountain on a bank of the river Manzanares in Madrid on June 18th. Photo: AFP

Aemet wrote on Twitter on Thursday that the risk of fire amid the hot summer weather was “extreme” in northern areas, as well as in the south and in the Canary Islands.

“Take a lot of precaution!” the weather service tweeted.

Spain is especially concerned about forest fires after a wildfire broke out in neighbouring Portugal at the weekend, killing more than 60 people. The Spanish government dispatched two water-bombing planes on Sunday morning to aid the Portuguese fire service on the ground.

Earlier this week, Spanish authorities announced they would be boosting their forest fire-fighting efforts, including the use of surveillance drones for the first time.

SEE ALSO: Spain to use drones for first time to fight forest fires

Four areas are on “significant” alert for high temperatures on Thursday – Navarra, Zaragoza, Huesca and Lleida – with the mercury rising to between 35C and 40C in these regions.

On Friday, Huesca, Lleida and Zaragoza will again be on high alert for hot weather, as will Cuenca, Albacete, and Tarragona. And three areas will still be on alert on Saturday: Córdoba, Jaén and Seville.

But by Sunday, Aemet predicts that the country will get some relief.

“The daytime temperatures will decrease across the whole country, except for in the Balearic Islands, the Mediterranean coast of the peninsula and the western coast of Galicia,” Aemet wrote in their prediction.

The cooler temperatures will be most notable in the Central System mountain range, in Extremadura and in the north of Andalusia. Winds from the northern coast of Galicia and in the Canary Islands is expected to give these areas more relief.

The Balearic Islands and certain points along the Mediterranean coast will still experience significantly high temperatures.