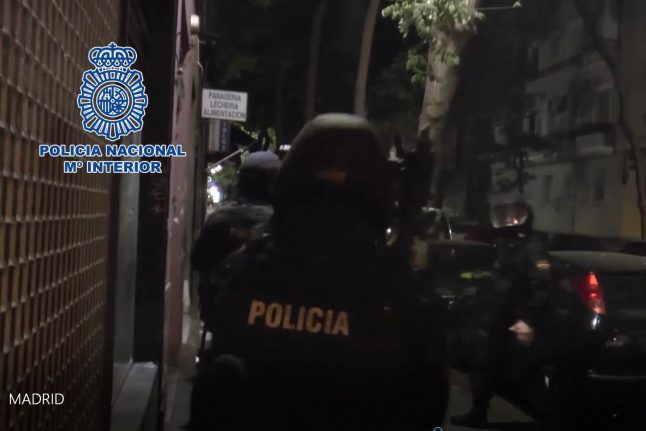 Screenshot from police footage of the arrest: Spanish Interior Ministry

The Interior Ministry reported on Wednesday that police had arrested a 32-year-old Madrid resident with Moroccan nationality, believed to be “integrated” into terrorist group Isis. In a statement, the ministry described him as being “in an advanced state of radicalization” and “extremely dangerous”.

“He appeared to have an extremely dangerous profile, corresponding with those of terrorists recently implicated in the attacks in the United Kingdom or France, and he was considered to be a clear threat to the security of our country,” the ministry wrote in the statement.

The man had conducted extensive work in studying and searching for official Isis training material, according to the ministry. Specifically, he had compiled an abundant amount of specific manuals about terrorist dynamics for jihadists, for example a manual for suicide attacks, or a manual on electronic jihad.

Investigators had been able to distinguish various indicators on social networks, linking the suspect to members of Isis located in Syrian or Iraqi combat zones.

The investigators also say that the man tried to convince others around him to carry out violent jihad in Spain, using the materials he had gathered to teach them of radical religious aspects and of operational techniques.

Police arrested two other Moroccan nationals as well, aged 38 and 33, who had been living in the same home and whom investigators believed could have been starting to engage in terrorist practices.

Since June 26th 2015, when the Interior Ministry raised the country’s anti-terror alert to level four, security forces have arrested 172 suspected jihadist terrorists inside Spain as well as outside the country. In total, 217 such suspects have been arrested since the beginning of 2015.