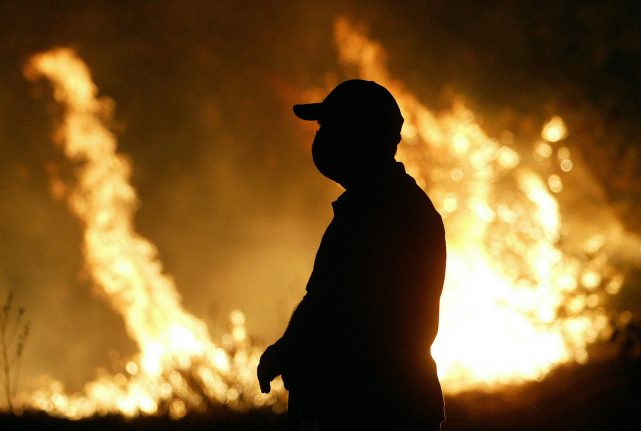 The 2005 forest fire in Guadalajara, which killed 11. Photo: AFP

The Ministry of Agriculture and Fisheries, Food and Environment presented on Tuesday its strategy for preventing forest fires, which are a high risk at the moment due to “incredibly hot temperatures” and a “serious drought”, broadcaster Rtve reports.

Part of the plan is to use four drones or Remote Pilot Aircraft Systems (RPAS) for nighttime surveillance.

These drones will be based in León, Albacete, Zaragoza and Cáceres, but they will be available for use across the country, according to Europa Press.

Another aspect of the plan is to use a recently developed information system, which aims to improve the management of global media, as well as the addition of two more helicopters.

The total budget for this year to fight forest fires is set for €85 million – an increase of 20 percent since 2011.

Agriculture Minister Isabel García Tejerina said that 95 out of 100 fires are caused by humans due to either carelessness or sinister intentions.

Spain will be able to fight fires with a total of 70 aerial vehicles – 256 in total when counting those possessed by local communities. Tejerina said that this number was the “most significant in Europe”.

“Spain is an example at the international level” for fighting forest fires, Tejerina said.

More than 1,000 people – including pilots and fire experts – will be working specifically on the ministry’s campaign this summer.

The Spanish government has been assisting neighbouring Portugal, which has been battling a wildfire since Saturday that has killed more than 60 people. The fire is believed to have started after lightning struck a tree.

When asked about whether Spain itself would be prepared to tackle a blaze such as the one in Portugal, Tejerina said she had “confidence” in the country’s services and equipment. The last time that Spain fought a fire similar in size to the one in Portugal was in 2005 in Guadalajara, which killed 11.