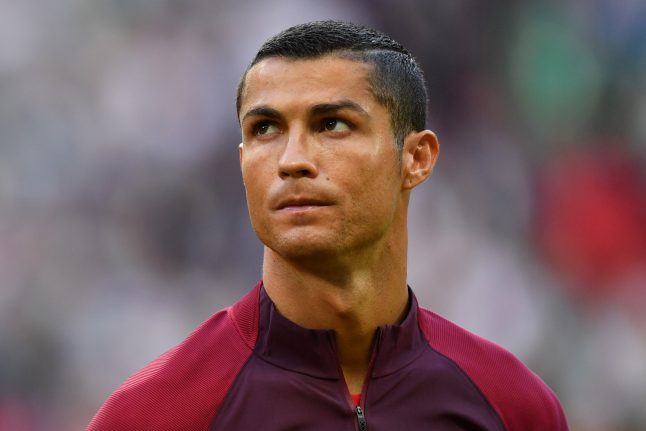 Ronaldo's departure from Real, reportedly a given according to a Portuguese  newspaper, triggered an avalanche of speculation over the potential destination of the world's highest-paid athlete.

But neither the Real star, on international duty with Portugal at the Confederations Cup in Russia, nor the club itself have confirmed reports that he is heading for the exit at the Santiago Bernabeu.

According to A Bola, the four-time Ballon d'Or winner will quit Spain in outrage at the country's tax authorities and dismayed by Real's subsequent
response.

Spanish prosecutors on Tuesday accused Ronaldo of evading €14.7 million ($16.5 million) in tax related to image rights through offshore companies between 2011 and 2014.

If put on trial and found guilty, the 32-year-old risks “a fine of at least €28 million” and could be jailed for three-and-a-half years, the Gestha union of experts at Spain's Inland Revenue said in a statement.

Real insisted they were “absolutely convinced” Ronaldo would prove his innocence and pledged him the club's “full confidence”.

“We understand he has acted in accordance with the legality regarding the fulfilment of his fiscal obligations,” Real said in a statement.

“Sometimes the best answer it's to be quiet,” Ronaldo retorted Thursday on Instagram, with a photo of himself in a Portugal polo shirt and right forefinger raised to his lips.

Sometimes the best answer it's to be quiet

But A Bola dropped a bombshell the following morning, with Marca swiftly running with the story.

The Spanish sports daily claimed Sunday that Real coach Zinedine Zidane broke off his holiday to call Ronaldo in a bid to persuade his unsettled star not to walk out on the club.

Marca reported the Frenchman told Ronaldo that “Real Madrid are a team that wins because of him” and “he needs his competitive spirit just like his goals”.

The paper added captain Sergio Ramos also reached out to Ronaldo, who has a club-record scored 406 goals in 394 matches for Real, pleading with him to stay.

Ronaldo's unease has been apparent for some time, with the Portuguese repeatedly airing his grievances at being whistled by the club's notoriously demanding fans.

After ending Real's five-year wait for a La Liga title in May, Ronaldo complained of being “treated like a criminal”, as Spanish media speculated on tax fraud charges.

“I am not a saint, but I am also not a devil like many people think I am.”

Barcelona were also targeted by press leaks surrounding the possible departure of Lionel Messi last year when he was in the crosshairs of tax authorities.

The Argentine was handed a 21-month jail sentence – suspended as a first-time offender for non-violent crimes – and slapped with a fine of €2.1 million.

In reply, Barca “responded with incremental salary increases that, in a way, helped the footballer face up to the fine and to calm minds,” El Mundo recalled on Sunday.

Ronaldo's lawyer, Antonio Lobo Xavier, rejected the comparison with Messi, pointing out the Barca star hadn't declared his image rights “while Ronaldo has done that”.

But “since his arrival in Spain in 2009 until 2014 for which he declares €5.6 million, he hadn't declared any income from image rights which looks like a covering up of these revenues, this is what prompted the tax investigations and inspections,” Gestha president Carlos Cruzado told AFP.