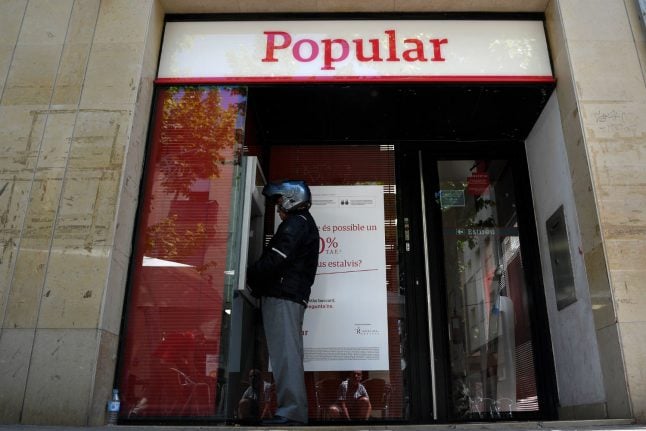 On June 7th, the European Central Bank (ECB) announced Banco Popular was “failing or likely to fail” and would be sold to Santander, the eurozone's largest bank, for a symbolic euro.

This was the first time that such a decision had been taken by the ECB since it took over as Europe's banking supervisory authority in 2014.

Keen to explain the operation, Spain's Economy Minister Luis de Guindos told parliament this week that, by June 6th, Popular no longer had any liquidity and would not have been able to open its agencies the next day if it hadn't been bought.

People's 60-billion-euro savings were preserved and “not one euro of public funds” was spent in the rescue, he pointed out.

But this did not pacify critics.

The Expansion financial daily revealed that local authorities who had money in the bank had taken out their cash before the buyout, as had investment funds, adding to the liquidity crisis.

These withdrawals “coincided with the moment when national financial authorities were saying that 'Popular fulfilled regulation requirements'… and were trying to reassure savers,” the daily said.

More generally, “how did a 'zombie' bank keep afloat for five years? What was the role of the government and supervision authorities?”, asked Socialist lawmaker Pedro Saura in parliament.

He was referring to the period since the 2012 EU rescue of Spanish banks, which Popular refused, believing it could struggle through and survive by raising more capital.

Then on Tuesday, the central bank's inspectors expressed surprise at estimates provided by the Deloitte consultancy that were used as a base by European authorities to fix the sale at one euro.

These estimated the value of Popular “between minus two billion and plus eight billion” — a huge discrepancy that left experts scratching their heads.

“Either the scenarios were extremely diverse, or the 'expert' was not such an expert, or he was not independent,” the inspectors wrote.

They also pointed out that Popular passed stress tests aimed at measuring its financial mettle last year, saying this showed the “futility” of such evaluations.

On another note, would it have been possible to prevent the flight of liquidity by banning rampant short selling on Popular — the practice of selling a security in the belief its value will decline and buying it back at a lower price?

By the time Popular was bought out, its shares had fallen so dramatically they were just worth 32 cents.

“If short selling had been banned for three months, Banco Popular would still be alive,” says Robert Tornabell, a banking expert at Spain's Esade business school.

But it would still likely have needed saving in the long run, which could have entailed a public bailout.

And Spain's Prime Minister Mariano Rajoy, at the head of a minority government, could not afford such a scandal as he faced a vote of no confidence over rampant corruption brought by far-left opposition party Podemos, says Tornabell.

This could have given Podemos further ammunition for the vote this week, which eventually failed, as the bailout of banks during the crisis caused controversy.

On Friday, the central bank said the state may only ever retrieve just over a quarter of the multi-billion-euro aid it granted.

In parallel, Banco Santander is considering compensating some small shareholders who lost all their investment in the buyout of Popular.

The bank could face thousands of legal challenges over this. Two official complaints have already been filed in Spain, and others are reportedly in the works in the United States.

If their lawsuits are accepted and they win them, “taxpayers may have to pay” as Popular's bonds — which were sold to many investors – were guaranteed by the state, says Tornabell, meaning it promised to take responsibility if the bank could not meet its obligation.