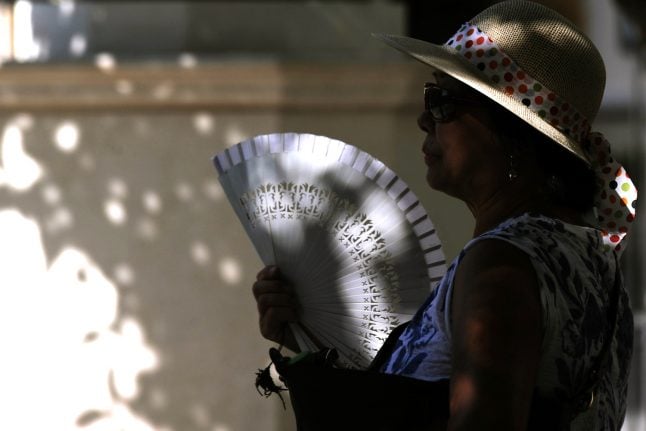 File photo of a woman with a fan in Seville. Photo: Cristina Quicler/AFP

Get out your abanico, because this weekend is set to be a scorcher, according to Spanish weather service Aemet.

Starting on Friday, the mercury is set to rise to 40C and above, from Granada in the south, to Toledo in central Spain, up to Lleida in the northeast. Badajoz, Córdoba and Seville will all see their thermometers reach 42C over the course of the day.

In total, 15 provinces are on orange alert – meaning significant risk – for high temperatures.

But it won’t be all sunshine: Storms are set to hit the area around Jaén and Granada, as well as around Salamanca and in Aragón.

Aemet also warned on Twitter that the risk of forest fires is very high, mainly in the south, northeast and northwest.

On Saturday, the country will be mostly sunny and hot, though parts of Castile and León as well as Andalusia will still have rain.

Badajoz, Córdoba and Seville will again be sweating in 42C heat.

Sunday is also set to have high temperatures in the interior of the peninsula, especially in the valleys of Guadalquivir, Guadiana and Tajo.