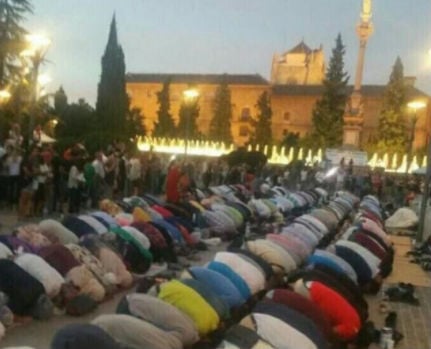 The gathering was sanctioned by authorities at City Hall and welcomed by the Socialist mayor Francisco Cuenca as an act demonstrating Granada as a “city of co-existence and tolerance”.

The event was open to “people of all faiths to promote a better understanding of the Ramadan celebration” according to the organizers of the joint-project between the Euroarab Foundation and City Hall.

But the chosen place for the prayers – in the Jardines del Triunfo – provoked outrage from some quarters because it is the site of a Virgin Mary statue that is revered by Roman Catholics in the city.

Meanwhile the far-right party VOX called for an “act of reparation” with Catholic prayers for “those who show their faith and defending the customs, values and culture inherited from our parents,” the group said in a statement.

“And to protest against the council of this municipality who, by action or omission, have given permission and consent to a symbolic public space being taken over by the Muslim community”.

Jemi Sánchez, PSOE councillor for social rights in Granada, defended the Ramadan event insisting “multiculturalism can never be a threat, it is an added value.”

“For the first time, the City of Granada supports its Muslim community wishing them a happy Ramadan in the gardens of Triumph,” she wrote on Facebook. “[It is something] unprecedented that brings us closer and makes us more equal.”