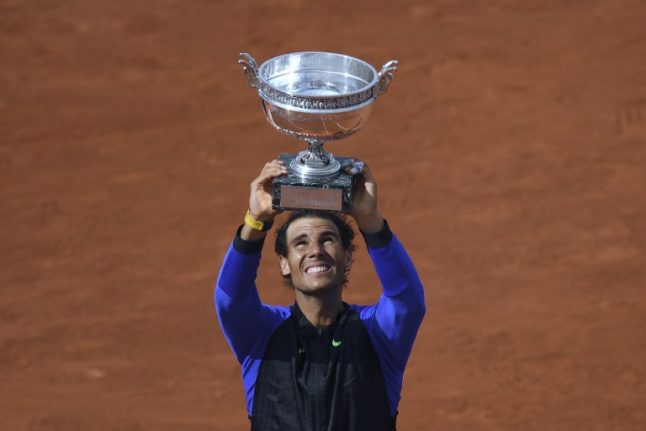 On Sunday, the 31-year-old Spaniard coasted to a record 10th French Open title, demolishing Stan Wawrinka in a brutally one-sided final which also earned him a 15th Grand Slam crown.

His collection of Slams now stands just three behind great rival Roger Federer, a staggering statistic coming just a year after he quit Roland Garros with a wrist injury.

His last Grand Slam title before this year's Roland Garros came in Paris in 2014 and he admitted that there were doubts over whether or not he'd recover his former powers.

“I have doubts every day but that's good as it makes me work hard with more intensity,” he said.

“You have to be humble and accept that you have to work to improve things.

“Life is never clear. If you have no doubts, then you are very arrogant. I am not an arrogant person.”

After winning his ninth Roland Garros and 14th major in 2014, Nadal's best performance at the Slams was two quarter-final spots.    His world ranking slipped as low as 10 in 2015 and his 2016 French Open was ended prematurely after the second round by a wrist injury.

But he finished runner-up at the Australian Open in January, losing in five sets to Federer and he was back in business.

He dominated the clay court season with titles in Monte Carlo, Barcelona and Madrid.

He lost just one match on clay all year while his win on Sunday took his Paris record to a staggering 79 wins and just two losses.

Against world number three Wawrinka, his record is now 16 wins and three losses. On clay, it's 7-1.

Nadal went through the tournament without dropping a set for the third time in his French Open career.

He lost just 35 games in total, second only to Bjorn Borg's record of 32 in the Swede's 1978 title-winning season.

“I had tough times last year so it's great to have big success again.”

Despite his dominance at the French Open, Nadal said he never took victory for granted.

He was aware of being within touching distance of the title in Australia in January when he was a break up in the final set only to lose to Federer.

“But I have come close before — in Australia this year and in 2012 in Australia (when he lost an epic final to Novak Djokovic).

“So my mentality was that I cannot give Stan the chance to get back into the match.

“But I knew that I had been playing too good in the tournament to play a bad final.”

Nadal said he had not given up hope of taking back the world number one ranking that he last held in June 2014.

“If I win I have chances to become number one — if I play well, why not?”