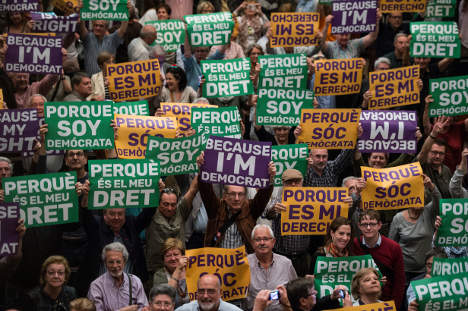 An independence referendum will be held in October despite Madrid's opposition. Photo: Josep Lago/AFP

Carles Puigdemont, Catalonia's fiercely secessionist president, announced on Friday that he would go ahead with a vote on October 1st despite Madrid's opposition, drawing a sharp rebuke from Spain's central government – and concern from public workers.

They will be called upon to organize a referendum which the Constitutional Court has ruled is unlawful, by carrying out such steps as opening schools to serve as polling stations, or policing the 7.5-million-strong region in Spain's northeast.

As a result, they may be forced into a delicate position – having to choose between obeying their immediate superiors and facing possible sanctions for disobeying Spanish law, or sticking by the Constitution.

“Many have called us, concerned,” said Joan Escanilla, president of the Catalan branch of Spain's CSIF civil servants union, which has close to 9,000 members in the region out of a total of 300,000 public workers.

“The problem that we civil servants have is that we're in the middle of the railway tracks, and we're going to be hit by one train or another.”

Not risking 'my salary'

In Catalonia, like in the rest of Spain, civil servants are first and foremost under obligation to respect Spain's Constitution.

If they disobey orders by their Catalan bosses, they could face disciplinary sanctions.

But if they obey, they will go against Spanish law and will therefore face sanctions, which may even entail losing their jobs.

Josep Miquel Milagros, an agent in Catalonia's Mossos d'Esquadra police force, summed up the situation: “I'm pro-independence but I'm not going to risk my salary.”

The 17,000-strong Mossos d'Esquadra force is under the control of the regional government but is also bound to respect Spanish law.

“We could find ourselves between a rock and a hard space,” says Milagros, who is also spokesman for the USPAC police union.

“As police officers, we have to obey the law, we have no other choice.”

Exactly how Catalonia is going to go against Madrid and organise a referendum deemed illegal by the courts remains unclear.

In a bid to circumvent all the legal and practical challenges in organising such a vote, the regional government has drafted a law seeking to extract Catalonia from Spain's legal system.

It is expected to present the bill in the next few weeks to the regional parliament, where pro-independence lawmakers have an absolute majority.

The law will in theory force all civil servants who work in Catalonia to obey the regional government come what may, further raising the stakes for public workers.

“Those who don't obey will be sanctioned,” pro-independence lawmaker Lluis Llach said recently at a conference.

However, just like the referendum itself, the law will likely be suspended by the Constitutional Court.

On Friday, Spain's government spokesman Inigo Mendez de Vigo said Catalonia's regional executive was not only under obligation to respect the law and protect the rights of all Catalans, but also “preserve the neutrality of all Catalan civil servants.”

And the central government has more drastic ways to stop the referendum.

It can ask the Constitutional Court to suspend Puigdemont for disobedience, or it has the power to take temporary control of the regional government, even if this would be a last resort.