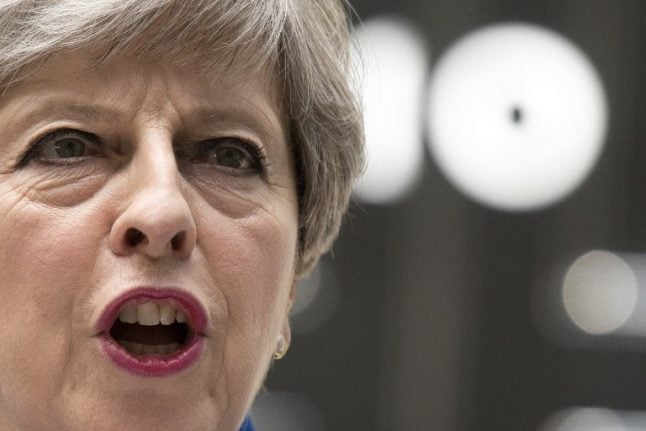 Theresa May outside Number 10 on Friday morning. Photo: AFP

Spanish Prime Minister congratulated May on “her electoral victory” and said “we will continue to work for a fruitful relationship in the interest of the people”.

Spain has its own experience of a hung parliament and the difficulties that brings in forming a government.

Mariano Rajoy finally secured a minority government in September 2016 after ten long months of political deadlock and two general elections failed to give him majority rule.

The British election results competed with news of Spain’s own looming troubles, as Catalonia’s president announced plans to hold a referendum on independence for the region in October.

Those on the left in Spain, including Pedro Sanchez, the leader of Spain’s Socialists (PSOE)  and Pablo Iglesias were quick to congratulate Britain's Labour party leader Jeremy Corbyn, who defied critics and vicious personal attacks in the press to gain seats.

Congratulations @jeremycorbyn on a magnificent result. You shall find us by your side to defeat austerity & xenophobia across Europe. pic.twitter.com/JiqsHVFHWm

And British nationals living in Spain were reading plenty into the election result.

Members of the anti-Brexit Bremain in Spain group suggested the result could curtail Theresa May's plans to bring about a so-called hard Brexit.

“She hasn't got the mandate that she expected and hopefully the opposition parties and few Tory Remainers will curtail her Brexit madness and she will have to really consider the rights of UK citizens in the EU and EU citizens in the UK and make them more of a priority. We hope,” wrote Carol Irving on the Bremain in Spain Facebook page.

Another wrote: “Feeling more optimistic. Very pleased that the UK has rejected austerity and the desecration of our public services, and hopefully staying in the open market.”

“With regard my situation here, I of course hope that this result means a less hard Brexit, allowing my Spanish friends to stay in the UK, allowing EU NHS workers to continue on in Britain and for myself to stay here in Spain,” said Fiona Locke. Others suggested that result was not as positive as it first seemed, and expressed concern.

“What we have now is a wounded Tory party in govt and a labour leader who has more influence on Brexit then he ought to have. This is now a two front war,” he said.

READ ALSO How Swedes reacted to UK election: 'Could be messy'

Another commented: “Well if Theresa May has her way, and she's just stated it's business as usual, and Brexit going ahead, we are losing everything, looks as though nothing has changed, but have to wait and see if other MP's will stand up and fight for our rights in the EU, and EU immigrants’ rights in UK, and fight against all the detrimental cuts etc in the Tory manifesto. Am not happy.”

Brits living in the eurozone, especially pensioners who receive their income from the UK in pounds have been hit hard since Brexit and the pound again nose-dived with the election result, dropping from €1.34 to €1.13 on Thursday night.

“My desire for May to step down presently overrides any personal losses caused by a weaker GBP against EUR,” wrote Jo Chipchase. “The best possible outcome would be to have the rights of British citizens in EU countries and EU citizens in the UK secured asap and to see any idea of a hard Brexit scrapped!”

Indeed, what remains clear is the desire by those 3.5 million EU citizens in Britain and 1.2 million UK nationals on the continent to have their citizens’ rights after Brexit secured.

“The EU has made a generous, unilateral offer to UK citizens in the EU and is prepared to guarantee the vast majority of our rights,” said Jane Golding, the chair of the British in Europe Coalition in a statement released by the group on Friday.

“Now the election is over, we need urgently to know the UK’s response to that offer so we can see an end to the uncertainty facing thousands of families.”