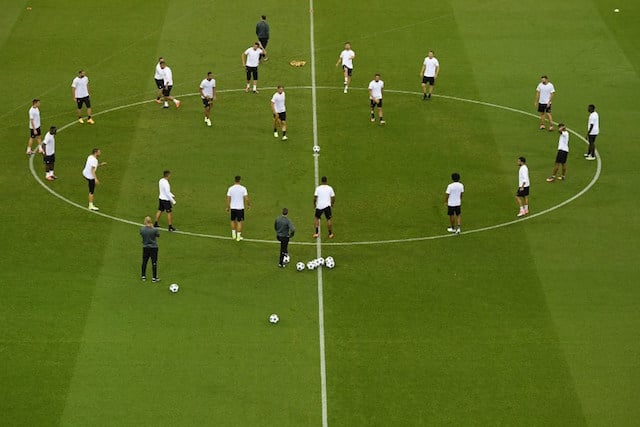 The Juventus team at a training session in Cardiff, on June 2nd. Photo: Ben Stansall / AFP
The television spot announcing the final in Cardiff opens on footage of the white-clad players of Real Madrid — arch-rivals of Barcelona in Catalonia — lifting the trophy of a previous edition.
READ ALSO: Real Madrid given green light for stadium makeover
“There are only 11 men capable of avoiding the unavoidable,” a voice-over says, as images of Juventus players appear.
“Eleven men prepared to change destiny and inflict a nightmare evening on the all-powerful white group,” it goes on to say.
The TV3 channel's advertisement comes as Madrid clashes with Catalonia's pro-independence executive over its drive to separate from Spain.
The regional government wants to hold an independence referendum in the autumn, but Madrid has repeatedly countered that it will not allow a vote it considers illegal and incompatible with Spain's Constitution.
READ ALSO: An historical look at the drive for Catalan independence
The TV spot has generated criticism and sarcasm in social networks, where some users have pointed out that Juventus beat Barcelona in the Champions League quarter finals.
“TV3 is… a television financed by the taxes of those who vote for independence or against independence,” Carles Francino, a journalist who supports Barcelona and former TV3 employee said on the Cadena SER radio where he now works.
He added that it corresponded “to the annoying fixation of us and them, of friends and enemies that impregnates everything.”
Josep Lluis Garcia, a Catalan professor and councillor for the pro-independence ERC party, tweeted that the commercial was “unnecessary and reprehensible.”
Xavier Garcia Albiol, head of the ruling conservative Popular Party in Catalonia, tweeted: “I'm not for @realmadrid, but this is the best example of the embarrassment that @tv3cat has become.”
READ ALSO: Catalan leader wins backing for independence referendum
TV3 retorted that this was a case of creative advertising and not journalism, designed to “create the maximum buzz.”
“The Champions League is the most powerful sporting event which Catalonia Television has rights to, but these are not exclusive,” a spokeswoman said.
“That means we are in a highly competitive environment with regards to positioning our content, and that's why the strategy and creativity were more daring this time round.”