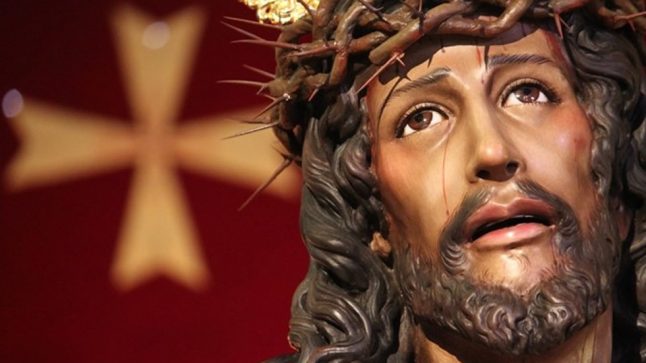 A photo of this statue of christ was photoshopped and offended religious authorities. Photo: Hermandad de La Amargura de Jaén

Daniel Cristian Serrano manipulated an image of the revered Cristo Despojado – Christ Disrobed –  placing his own face, complete with a ring through the septum of his nose, beneath the crown of thorns.

He posted the image on his Instagram account on April 25th last year, an act that sparked outrage after it was spotted by members of the religious brotherhood in charge of the statue.

The Hermandad de La Amargura de Jaén filed a criminal complaint against Serrano after he twice refused their written requests to remove the image, arguing that the Instagram post was offensive to their religious belief.

The prosecutor’s office has confirmed that Serrano has been charged for an “offence against religious sentiment” and will be called to appear in court in Seville where he faces a fine of €2,160.

The doctored image represents “a disgraceful manipulation of an icon designed to offend the religious sentiments (of the Brotherhood)” according to the case filed by the prosecutor.

In an interview with his local paper the Diario de Jaen on Thursday, Serrano insisted: “It was just a joke, I had no intention of offending anyone.”

He explained that it came about when he was with a friend playing around with a face-swap app.

“I was shocked by the outrage it caused,” he explained. “But I decided that I wasn’t going to delete it because I have the right to freedom of speech. Even though I didn’t intend to offend.”