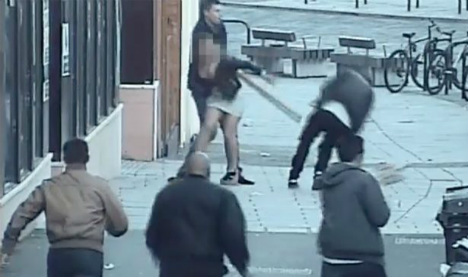 Tomás Gil from Valencia was attacked by a racist thug for speaking Spanish.

The request follows concerns raised by Podemos in Spain’s parliament about the perceived rise in attacks and verbal abuse experienced by Spaniards in the UK, reported Europa Press.

Reports suggests that since the referendum last June – when Britain voted to leave the EU – xenophobic attacks on those appearing to be from abroad, or speaking foreign languages, has grown.

One such attack involved Tomás Gil, a 27-year-old from Valencia who was talking to his girlfriend in their native language after a night out in the British seaside town of Poole when he was set upon by a racist thug.

The pair were standing together on the street in the Dorset town on the southern coast of England when Daniel Way overheard them speak in their native language, ripped a plank of wood off a building and smashed it into the Spaniard's face shouting:  “F***ing Spanish, Speak English”.

The incident was caught on CCTV and was widely reported, making headlines in both the UK and Spain and resulting in the prosecution of their attacker.

In light of such attacks, Podemos tabled a parliamentary question to the government asking for information on the number of xenophobic attacks reported by Spaniards in the UK and “what measures are being taken to protect them”.

Spain's government replied that: “We have sent details of specific cases of which we are aware to the UK’s Foreign Office and Home Office and have requested an investigation”.

Spain’s Embassy in London has a statement on its website for those Spaniards who suffer aggressive incidents or attacks.

“The Spanish Embassy in London and its consulates in London and Edinburgh have been aware of various incidents and attacks that have affected Spanish citizens residing or passing through the United Kingdom,” reads the statement.

“For this reason, it is advisable to report to the British police and to inform the Embassy and Consulates of any incident or aggression, so that it is possible to give the necessary attention to the victims and their families and to carry out the appropriate follow-up with the British authorities.”

A surge in the number of racially motivated hate crimes was reported in the aftermath of the referendum on June 23rd when a majority voted for Britain to leave the EU.

Nearly 5,500 racially or religiously motivated offences were reported to police in the month after the vote, according to Home Office figures, including assaults, verbal abuse and xenophobic graffiti.

Others have reported a significant rise in hate speech since the vote and the triggering of Article 50 in March.

“What we have noticed, using our various bits of software, is there has been an increase in hate speech around this event,” said Matthew Williams, co-director of the Social Data Science Lab at Cardiff University.

“It is worrying. We’ve entered into what I’d say is a new darker phase when it comes to relations with minority individuals in the UK, whatever minority they may be.”

Spain’s embassy in London estimates that around 200,000 Spaniards reside in the UK while VisitBritain.org recorded that some 2.2 million visitors to the UK hailed from Spain in 2015.

READ ALSO: All the latest Brexit-related news from Spain