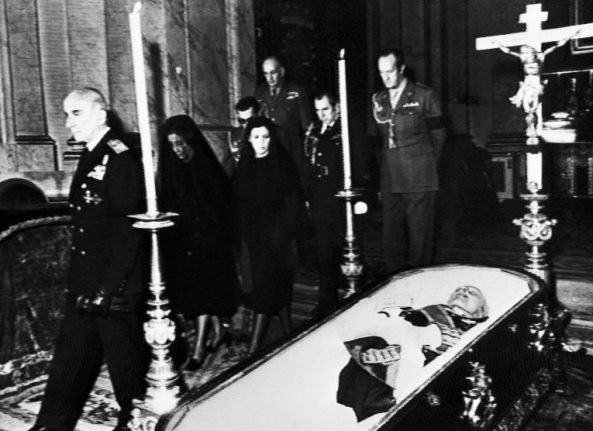 The non-binding resolution passed on Thursday proposes that the vast basilica topped by a 150 meter high granite cross be transformed into a place of “reflection and reconciliation” rather than a monument to fascism.

The vote was passed after 198 MPs voted in favour of the motion presented by Spain’s Socialist party (PSOE), one voted against and 140 abstained.

The motion, which was debated in the lower house on Tuesday ahead of Thursday’s vote, is purely symbolic and is not legally binding.

The conservative government of Prime Minister Mariano Rajoy, whose Popular Party voted against the resolution, can choose not to pass it into law.

The motion attempts to kick start the Historical Memory Law of 2007, which has effectively been ignored since the PP came to power in 2011.

The PP has been a strong opponent of the law claiming that the past should be left alone and that the legislation was politically motivated.

The resolution, which had the support of Podemos, not only requests the removal of Franco, but calls for the transfer of José Antonio Primo to a less prominent position in the site.


The Valley of the Fallen in the Sierra de Guadarrama, 50 km northwest of Madrid.

It also requests that a full report be made of how the structure was built using forced labour by Republican prisoners and plaques be put in place to inform visitors of its true history.

The motion also wants a DNA base to be established so relatives can identify the remains of their loved ones whose bones lie unmarked in the vast crypts.

It also wants the creation of a truth commission to investigate the Franco years (1939-1975).

But the resolution, is unlikely to go further without a remarkable volte face by the PP as the Spanish executive maintains the right to veto parliamentary initiatives that require budgetary considerations.

FULL STORY: Is Spain about to dig up dictator Francisco Franco?