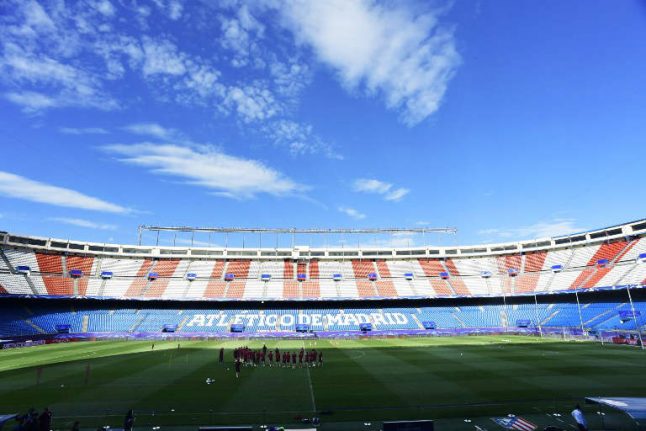 Real Madrid takes on Atletico at the Calderon on Wednesday. Photo: AFP

Los Blancos are looking to seal their place in the Champions League final once more and enjoy a commanding 3-0 first leg lead.

And Ramos hit back at the simplification of the rivalry between the two Madrid giants as Real's riches against Atletico's hard work.

“It seems like here we have grown up in Beverly Hills,” said Ramos on Tuesday.

“Here there are people from humble backgrounds too.

“The sacrifice is what fills you with desire to win.”

An already intense rivalry has reached new levels in recent seasons as under Diego Simeone Atletico's status and ability to challenge Real has grown.

However, Atletico have consistently fallen short against Real in the Champions League.

Unless they pull off a remarkable comeback, Simeone's men will bow out of European competition against their fiercest rivals for the fourth consecutive season.

“If I needed to motivate the players for a game like tomorrow I would need to leave the club,” said Simeone.

“Tomorrow we face a very tough opponent that beat us 3-0 at their home, that beat us 3-0 in the first half of the season in the league and in two finales, one on penalties and the other equalising in the 93rd minute.

“It is clear it is a great challenge.”

However, the size of Atletico's task is illustrated by the fact that Real have scored in all of their last 60 games stretching back over a year.

“We have to defend well tomorrow. That will allow us to be in the game as long as possible,” insisted Simeone on the threat of a Real away goal that would force Atletico to score five.

“I know what we are capable of. I know these players, I've known them for five-and-a-half years and I have no doubt they are going to play well.”

Even by their standards, Real are on the verge of completing the most glorious season in the club's decorated history.

Should Zinedine Zidane's men complete a La Liga and Champions League double, it will be Real's first since 1957/58.

Moreover, they could become the first side in the Champions League era to retain the trophy.

And Ramos insisted he is relishing a challenging end to the campaign rather than wilting under the pressure.

“There is no feeling of vertigo. The contrary, it is in our own hands,” added the Spanish international.

“The good part of the season is coming, there are two weeks left and we'll see what happens in the end.

“I would settle to be in this position every year.”

After 50 years at the Calderon, Atletico move to the new 67,000 capacity Wanda Metropolitano next season.

“It is an even extra motive to think and feel the possibility of a comeback, even though we have an adverse result,” he said.

“The other day at the Bernabeu after losing 3-0 all you heard were the Atletico fans. It gave me goosebumps.

“The fans shows us so much love and support, we have to show we can match their standards.”

Zidane is expected to resort back to the side that started the first leg after making nine changes for Saturday's 4-0 win at Granada bar the introduction of Nacho for the injured Dani Carvajal at right-back.

Atletico's injury crisis at right-back is expected to be resolved by the return of Juanfran after three weeks out.

Otherwise, Simeone is also expected to name the same side that started the first leg.