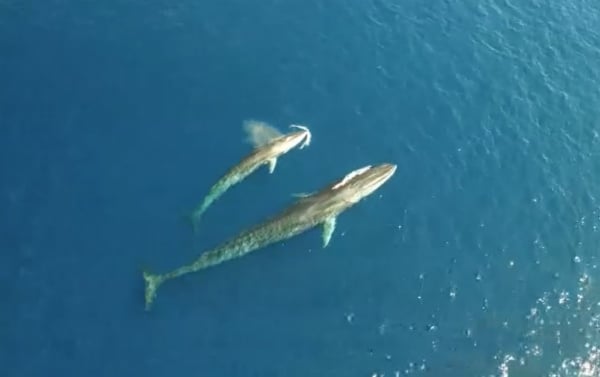 Last week the team at Barcelona’s marine science association EDMAKTUB captured stunning footage of a fin whale feeding her calf off the coast of Catalonia.

The rare footage was recorded using a camera drone, the latest tool in marine wildlife protection.

The unmanned aircrafts enable researchers to study marine animals, such as the endangered fin whale, without disturbing them.

“The drones are providing arial images that give us the sort of information that cannot be obtained from a boat,” said a statement from EDMAKTUB.

“From a boat it’s only possible to observe the animals from above the surface of the water. With the drone, you can observe all the individuals and groups, even if they remain totally submerged”.

The latest sighting, just six nautical miles off the Garraf coast, was of a mother fin whale Balaenoptera physalus around 23 meters in length and her young calf, measuring around eight meters.

Whale calves are fed with milk from their mother until they are weened at around six months old when they are typically around 11 meters from nose to tail.

The drones do not go unnoticed by the whales and dolphins they are used to track.”Cetaceans are aware of the presence of drones,” said EDMAKTUB. “Risso’s dolphins tend to look upwards to the drone to investigate their surroundings, they are watching the drone, while they are being watched.”