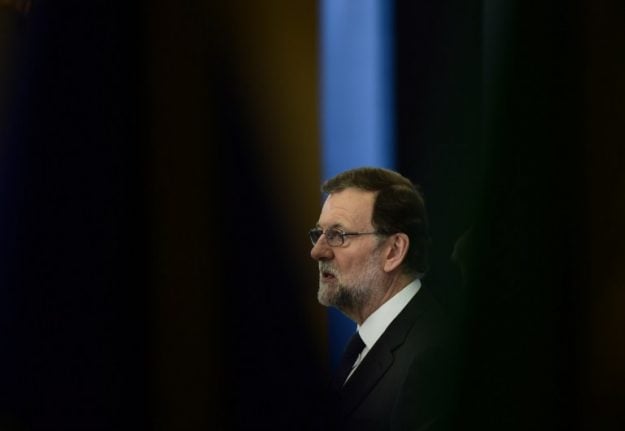 File photo: PIERRE-PHILIPPE MARCOU/AFP
On Tuesday, the 62-year-old conservative leader was summoned to testify as a witness in a graft trial involving former members of his party.
While not accused of anything, he will be the first acting Spanish prime minister to take the stand. One defendant has already claimed the party ran a slush fund, prompting a separate investigation and parliamentary probe.
On Wednesday, police arrested 12 people in Madrid — including the former Popular Party (PP) regional president — in an inquiry into embezzlement of public money.
Police a day later raided several companies accused of bribing the party in exchange for contracts.
And that same day, Esperanza Aguirre, another former PP president of the Madrid region, broke down in tears on television while pledging she was unaware of the alleged corrupt activities of those once her closest advisers.
'Sons of bitches'
These are but some of a series of corruption twists and turns that have tarnished the PP's image over the years.
But despite the opposition's constant criticism and general corruption fatigue in Spain, Rajoy himself has only been marginally weakened by the scandals, analysts say.
Angry voters have flocked to two relatively new parties — far-left Podemos and centre-right Ciudadanos — but the PP still managed to win a general election last year, albeit without the absolute majority it won in 2011.
As a result, Rajoy now heads up a minority government with considerably less power than before.
But according to Jose Pablo Ferrandiz of polling institute Metroscopia, the most recent scandals don't threaten him.
“He's lucky not to have to fight any elections in the near future,” he said.
“He will go to the end of his mandate to try and clean up his image.”
Ferrandiz also points to recent polls that show voter intentions unchanged since elections last June, with the PP remaining ahead with 33 percent.
“The PP has an advantage over other parties in that its voters have pretty much accepted (the corruption allegations),” says Fernando Vallespin, politics professor at the Autonomous University of Madrid.
“Their frame of mind seems to be: 'they're sons of bitches, but they are our sons of bitches'.”
Divided opposition
And while Rajoy rules at the head of a minority government, the opposition has found itself unable to rally and fight.
The PP's traditional rival Socialist party, which has also been hit by its own corruption scandals, is in the throes of a fierce leadership contest after its previous chief Pedro Sanchez was ousted.
Ciudadanos, which supports the PP in parliament while still criticising it, is also locked in constant conflict with Podemos.
“If there were a consensus, then maybe one of them would dare table a vote of no confidence,” says Vallespin.
The PP, meanwhile, defends itself by pointing to a string of anti-corruption laws voted in when it still had an absolute majority.
Rajoy also regularly insists on Spain's economic recovery under his direction, with a sharp drop in unemployment — even if Spain remains the second worst performer in Europe after Greece.
And on Thursday, he calmly downplayed the court's summons, saying it was “his duty” to take the stand.
“I will gladly reply to what they ask, and clarify what they want me to clarify,” he told reporters.