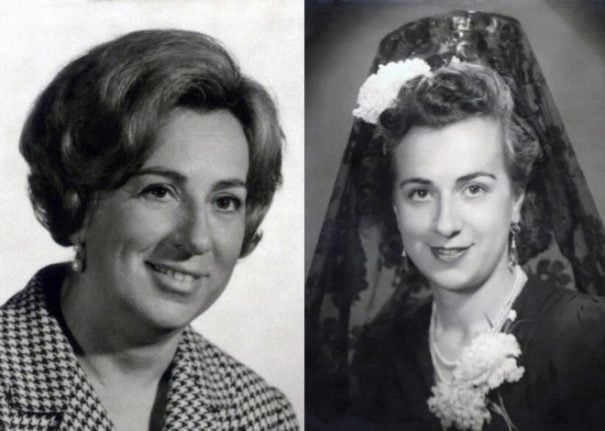 Now 16 years after he first came across a faded envelope on a “table of junk” in Els Encants market, that mystery has been solved and  Milagros Caturla, the female photographer responsible for the stunning intimate shots of life in Barcelona is about to get the recognition she never received in life.

The Local first wrote about Sponheim’s search for the photographer back in January when he explained the story behind a facebook page Las Fotos Perdidas De Barcelona –  The Lost Photos of Barcelona – which he set up in the hope that someone might recognize some of the people photographed and help solve the mystery. The page garnered more than 13,000 followers and although many came forward after recognizing places and even people in the shots, no-one could confirm who was behind the lens.

Fortunately, the page came to the attention of Barcelona-based photographer Begoña Fernández, who like Sponheim is an avid collector of old negatives.

After seeing Sponheim’s collection she was struck by the artistic value of the photographs and decided to undertake a spot of sleuthing.

“I had a hunch it was a woman that was responsible for these photographs,” she told The Local explaining that she recognized the intimacy between the photographer and subjects.

“I noticed that many of the pictures were shot in women environments, such as girls’ schools or ballet lessons, so considering that at that time (1960s) boys and girls attended separated schools in Spain, I thought it was likely the photographer was a woman,” she explained. Following her instinct, she tried to identify the school that appears in the photographs to see if that could provide a clue and identified it as the‘Carmen Tronchoni’ elementary school, popularly know as ‘Els Tres Pins’.

Coming up against false starts and dead ends, she had a stroke of luck when trawling the internet with the discovery that the female section of the Falange (the only political party allowed under dictator Franco) ran a photographic competition for women suggesting locations that appear in many the photographs, including the school. Fernández thought “perhaps some of (Sponheim’s) photographs were entered into the competition?”

But no trace of the winners, or entrants to the photographic competition, could be found in online archives so she turned to one of Catalonia’s oldest and most emblematic photography associations, the ‘Agrupació Fotogràfica de Catalunya‘ (AFC), where the director, Francesca Portolés,suggested that Fernández look through the monthly bulletins of the association.

There, after hours of painstaking research, she came across a photograph of the judging of the competition where she identified one of the pictures – a devout women caught in deep prayer –  in Sponheim’s collection.

And a caption beneath it read: Fervor, by Milagros Caturla, winner of the 4th prize in the contest. With that name, the mystery was solved.

And it didn’t take much digging around to discover more about the photographer, now dubbed the Vivian Maier of Spain.

Fernández discovered that Caturla had died in Barcelona died in an care home in 2008, where she had been suffering from Alzheimer’s.

The seventh of ten siblings, she never married or had children and despite qualifying as a teacher, she worked as a secretary for the council in Barcelona.

Fernández managed to track down one of her nephews, who remembers that his aunt had a dark room in her apartment. Fernández (centre) with Francesca Portolés, ex-president of the AFC and Lluís Caturla, Milagros' nephew, looking through the archives that helped identify the photographer.

She also discovered that as well as the fourth prize, she had won first prize in the same competition a year later, as well as other awards for her photography and had some of her photographs included in an exhibition of female photographers in Olot.

“For me as a woman and as a photographer like Milagros, it was amazing to confirm that my intuition was correct, because seeing her photos was like seeing myself in some way, in the way that how I would like to do photos and what I want to express with them,” explained Fernández.

“I was pretty sure from the outset that the photographer was a woman and in the end it became a personal quest for me,” she said.

“The quality of the photos was immediately apparent to me, because she catches the moment , she had the correct framing and light and the people in her photos are talking directly to her ,  and because of that to us.”

“I think is the way that she focused on the little things , a foot, or  a knee but always in a manner that transmits a sensation….”

Fernández has now teamed up with Sponheim and the AFC and they are planning an exhibition of the “lost photographs” in Barcelona within the next few months.