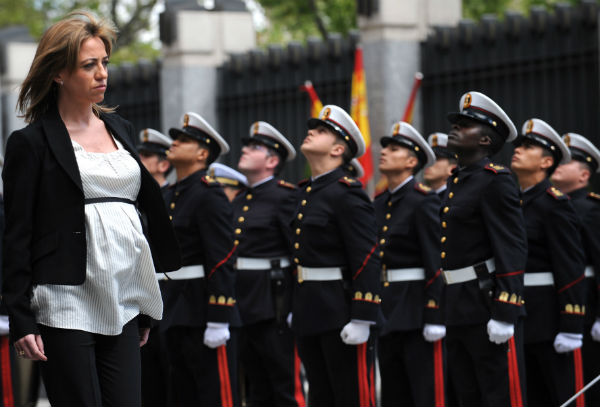 Carme Chacón was Spain's first Defence Minister taking the role in 2008 when she was seven months pregnant. Photo: AFP

Chacón was discovered dead in her Madrid flat on Sunday night when medics broke down her door after a neighbour raised the alarm.

“Dismayed by the premature departure of Carmen Chacón. Today all Socialists mourn out of pain and helplessness,” the opposition party said on its Twitter page.

The cause of death has not been confirmed, although Spanish news outlets reported that she had been suffered from a congenital heart defect.

Chacón, who was from Llobregat, Barcelona and joined the Socialist Youth at the age of 18 began served as a local councillor between 1999 to 2007.

She went on to become the first female defence minister from 2008 to 2011 under Prime Minister Jose Luis Rodriguez Zapatero, a role she took up when she was seven months pregnant.

She famously visited Spanish troops in Afghanistan when heavily pregnant. Chacón made a bid to replace Zapatero as head of the PSOE after the party was heavily defeated in Spain’s 2011 general election but narrowly lost.

She went to become general secretary for international relations between 2014 and 2016 when she resigned.

According to media reports she had been advised since childhood to lead a calm life because of her heart condition. But she ignored the advice repeatedly – including the suggestion that it would be risky to have children.

“I have a pulse rate of 35 beats a minute and my heart is reversed, I have a complete atrioventricular heart block,” she told the La Vanguardia newspaper in late 2015. “That makes me think that every day is a gift.”

Tributes flooded in from across the political spectrum and a wake was held at PSOE headquarters in Madrid on Monday afternoon.

Mr Zapatero said he was “heartbroken at the death of my comrade and friend”.

He said “we feel emptiness, because of the enormity of this loss, for Spanish democracy and for all socialists”.

She was separated and her son, Miquel, is now eight years old.