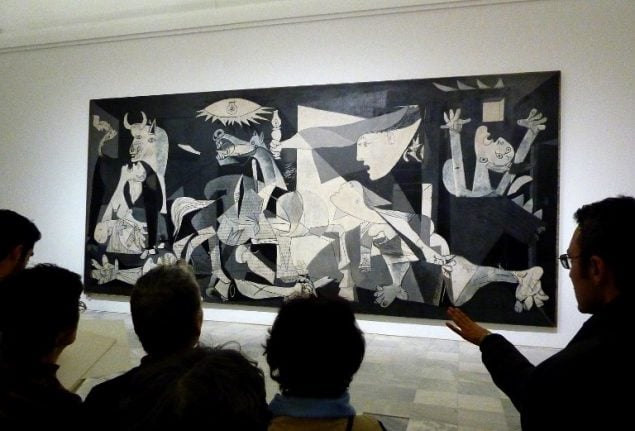 People look at the Guernica painting by Pablo Picasso at the Reina Sofia museum in Madrid on November 16, 2011. Photo: AFP

On Monday, Madrid's Reina Sofia museum launched a major anniversary exhibition that delves into the darkness of Picasso's work before — and also after — his masterpiece, and attempts to shed light on how he came to create one of the world's most famous paintings.

“Pity and Terror: Picasso's Path to Guernica” opens on Tuesday and runs until September 4th, bringing together some 180 pieces from the Reina Sofia's collection and more than 30 institutions around the world such as the Centre Georges-Pompidou in Paris, New York's Museum of Modern Art (MoMA) and private
collections.

“There is no other piece in the 20th century that has generated so many comments, so many interpretations as Guernica,” said Manuel Borja-Villel, director of the museum that has housed the painting for 25 years.

A depiction of the bombing of the small Basque town of Guernica on April 26th 1937, during Spain's civil war, the canvas mixes stark, almost unbearable images of women, infants, animals in agony.

It has since become a potent plea for peace, recognised the world over and used in countless anti-war protests.

To mark its 80th anniversary, curators decided to delve into Picasso's work from the mid 1920s when the artist took a turn for the more macabre, possibly in belated response to the devastating First World War and turmoil in his own private life.

“In 1925, Picasso begins to come to terms with the reality that the First World War had ushered in,” he added.

“It is by then very much the feeling… that 1914 had put an end to a long era of bourgeois peace, and that somehow it had shown the flimsiness and hollowness of the 19th century's belief in progress.”

The 1930s were also a period of considerable turmoil in Europe, as Spain's civil war — and then later World War II — broke out.

The exhibition features such works as “Woman Dressing Her Hair”, borrowed from MoMA, or “The Three Dancers”, a canvas usually on display in London's Tate Modern.

The latter, painted in 1925, portrays three figures engaged in a macabre, maniacal dance and represents the moment when Picasso's art took a dark, violent change of direction, said Clark.

In his earlier period of Cubism, Picasso had painted familiar objects and people — guitars, liquor bottles, a fruit dish.

But “The Three Dancers” signalled “the irruption of wildness, darkness and dismemberment into the world of the room,” the Reina Sofia explains in a guide to the exhibition.

“It did not take long… for his pictures to be populated by looming, threatening faces.”

This is evidenced by “Figures At The Seaside,” a 1931 painting on loan from the Picasso museum in Paris that crudely depicts a dismembered couple embracing with pointed tongues.

The pointed tongues will later be omnipresent in Guernica itself — “themes of sharpness, tongues and flames, angles and teeth and ears and rays of light,” said art historian Anne Wagner, also curator of the show.

Women with dead babies, a person crying blood — the exhibition also includes some of the powerful preparatory drawings that the artist did before painting Guernica in May 1937.

“We wanted to think about the attitudes, the concerns, maybe even the fantasies and obsessions and unresolved knots in the psyche that went into the making of Guernica,” Clark summed up.