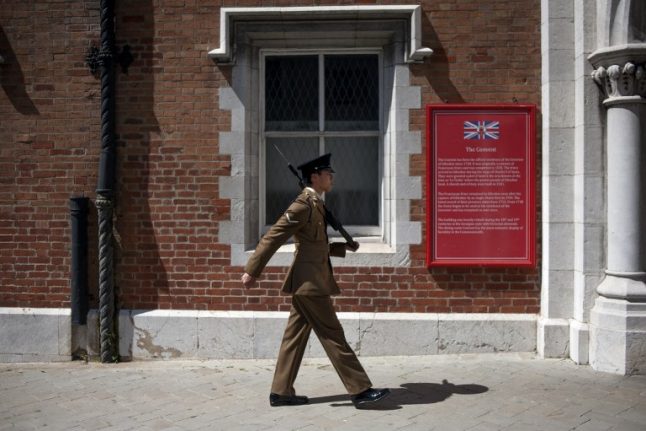 A member of the British army marches into the centre of Gibraltar on 28 March, 2017. Photo: AFP

The tiny British overseas territory on Spain's southern tip has long been the subject of an acrimonious sovereignty row between London and Madrid, which wants Gibraltar back after it was ceded to Britain in 1713.

The Rock fears that Spain may try to take advantage of Britain leaving the EU, a momentous move expected to start Wednesday that will also exclude the 32,000-strong territory from the bloc.

In theory, this could make it harder for people from Gibraltar to travel across their only land border to Spain, unless Madrid and London come to a bilateral agreement.

The Rock, which relies on tourism, financial services, online gaming and shipping services, also fears it could harm its economy.

Of Italian descent, married to a Spaniard whose family lives on the other side of the border, he says he “felt panic” when he woke up the next day.

Gibraltar, surrounded by the Mediterranean on one side and the Atlantic on the other, depends on the small land border with Spain for much of its provision of supplies and visitor flow.

Some 10,000 people also make the crossing daily from Spain to work, and they fear that Madrid may make things more difficult at the frontier.

Quick off the mark, Madrid has offered dual citizenship to Gibraltarians in exchange for joint sovereignty of the territory, which would allow them to remain British and in the EU.

Such a proposal isn't new, though, and had already been put to a 2002 vote in Gibraltar, which rejected it outright.

And even after Brexit, residents in the Rock don't appear to want to rush into Spain's arms, says Alfredo Vazquez, a 36-year-old accountant.

“It is a sense of identity,” he says.

For Jose Luis Martinez, a 40-year-old Spaniard who crosses the border daily to work in his events company, Brexit is also a concern.

He fears it may impact the Spanish border region, where unemployment is high and many work in Gibraltar, or the education of his daughter, who lives in Spain but goes to Gibraltar's bilingual school.

'Our own Berlin Wall'

But Gibraltar has seen worse.

Bossino was born in 1971 at the time of Francisco Franco's dictatorship in Spain, who closed the border with Gibraltar outright.

“It was our own Berlin Wall,” he recalls.

“I remember seeing a very good friend of mine with a split family. We would go to the closed gate and they would shout at each other with the family on the other side.

“Franco also cut the telephone lines, it was a complete blockade.”

Less extreme but still disruptive, Spain upped border checks in 2013 in a row over disputed waters, creating hours-long logjams and forcing the European Commission to wade in and ease the crisis.

Many fear this could happen again once Gibraltar loses its EU status.

But both Bossino and Vazquez remain positive.

“We've always been an entrepreneurial people, we will always find a way out,” says Bossino.