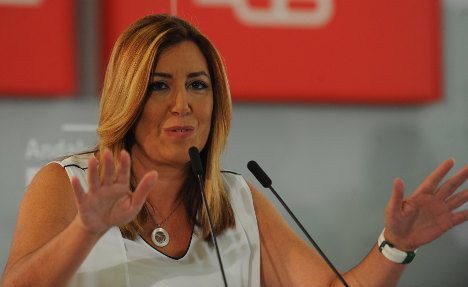 Susana Diaz, 42, the president of the southern region of Andalusia, is due to announce she will run in May primaries. Photo: Cristina Quicler/AFP

The 45-year-old former economics professor will be up against two other prominent candidates in a contest that will prove decisive for the future of a party that has run out of steam, much like fellow socialists in France and Britain.

The battle begins in earnest on Sunday when Susana Diaz, 42, the president of the southern region of Andalusia and one of Spain's most powerful female politicians, is due to announce she will run in May primaries.

A long-time rival of Sanchez, who was ousted in October after a bitter internal rebellion, Diaz will launch her candidacy near Madrid with the backing and presence of two former Socialist prime ministers – Jose Luis Rodriguez Zapatero and Felipe Gonzalez.

That same day, Patxi Lopez, the 57-year-old former president of the Basque Country and already a candidate, will meet with supporters in the northern region of Cantabria.

And Sanchez will head up a gathering in Valencia in the east, having already announced he will attempt a comeback.

Diaz, though, is backed by many high-ranking party members.

The primaries due in May at an as-yet unannounced date will see some 180,000 activists vote for their preferred candidate – a choice that will determine the future direction of the party.

Podemos, led by the charismatic Pablo Iglesias, has become Spain's third most powerful political force and threatens to overtake the Socialists as the main opposition grouping.

“The Socialist party must stop battling to avoid being relegated to third place, it must (instead) start to win again,” Socialist lawmaker Eduardo Madina summed up last week.

Sanchez has been a staunch opponent of Spain's conservative Prime Minister Mariano Rajoy and maintains that the party must continue in this vein to have any hope of winning back voters.

Rajoy must know that there “will be no Socialist votes for right-wing policies,” he has said, deeply critical of corruption scandals impacting the conservatives and of their severe austerity measures.

But this dogged resistance was his eventual downfall, as high-ranking Socialist party members rebelled against him in October, arguing it was best to let a Rajoy-led government through rather than go to third elections in poll-weary Spain and risk losing even more votes.

Sanchez resigned, an interim executive took charge and Rajoy eventually came back to power at the head of a minority government that now needs to negotiate many of its moves.

Conservatives fear that if Sanchez again leads the Socialists, his part and its lawmakers will go back into confrontation mode, blocking their bills or policies.

On the other hand, Diaz, who has said she “loves winning,” advocates “moderation” and is seen as being more amenable to negotiating with other parties.

Lopez is also seen as a moderate.

Whether the Socialists will manage to revive their political clout, however, will ultimately only be determined at the next elections.