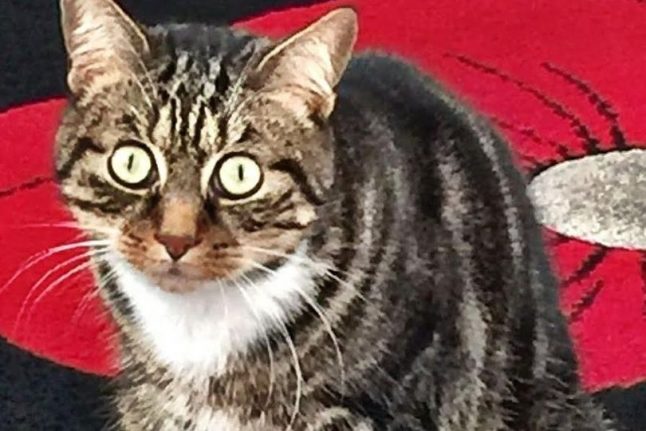 Itchy the cat has been missing for almost two weeks. Photo: Andrea Barragán

His desperate owner, Andrea Barragán, who was returning to her home in Catalonia after four years living in the north west of England, has complained of a “complete lack of concern” by authorities over the missing pet.

The tabby cat reportedly escaped from the flight crate after it toppled from a conveyor belt and broke open while being unloaded by Swissport ground staff at Terminal 2 in Barcelona’s El Prat airport, when the scared animal fled from the loading area next to the airport runway.

The owner says she was not immediately informed that her cat had disappeared and waited two hours after landing at noon on Saturday March 11th to be told that the crate had been mislaid.

It wasn’t until 6pm that she was finally informed that, in fact, the cat she had adopted as a two-week-old kitten had escaped from its crate and fled. She was then told that under no circumstances would she be allowed to look for it in the restricted area of the airport because of health and safety regulations. Barragán complained that she was being fobbed off,  as authorities, including Monarch, Iberia, Swissport and airport operator AENA, passed the buck between them and refused to take responsibility.

“They would pay more attention to a lost suitcase,” she said.

She was told no official search team would be organized and the best hope was if someone “just came across him”.

The cat’s owner took to social media to share her plight and her cause was picked up by animal rights charities who started a change.org petition urging the airport authorities to take responsibility. It has now garned more than 13,000 signatures.

Thanks to the public pressure, a group of volunteers have now been given access to the area where the cat is thought to be hiding, possibly with a colony of around 15 ferral cats that scavenge at the airport periphery.

The owner and a volunteer been given access to the airport between 9pm and 3am with a security guard when disruption is kept to a minimum. But they have been denied permission to set up a cage to trap him.

Itchy has been spotted by workers who identified him from his distinctive green collar but they were unable to get close to him.

“I am hopeful,” Barragán explained in a statement released by cat charity  Plataforma Gatera. “At home when I call him, he comes. I know that he is probably scared here but I have to keep trying.”