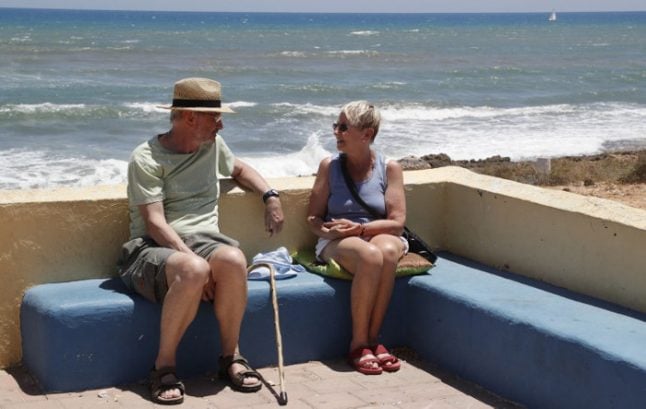 Time’s up on the sunshine? Photo: AFP

Among the challenges Brexit poses to the NHS, and there are many, is that it needs to get ready to receive a group of people whose healthcare is currently being paid for by the UK in other EU countries. Many are pensioners, and large numbers of them live in Spain. There are at least 100,000 retired UK citizens in Spain, according to official figures, though local estimates suggest it could be double that, or more.

In January, the prime minister, Theresa May, declared that “no deal is better than a bad deal” on Brexit. So it would be prudent to prepare for that “no deal Brexit” – the worst case scenario.

And when we analysed the legal position of British citizens in Spain we found that, although the situation is complex, it’s ultimately clear that if the UK leaves the EU with no deal, the NHS needs to gear up for many of them to return.

Healthcare within the EU works on a reciprocal basis. It relies on the legal principle that people can move around the EU and take their social security, pension, and healthcare entitlements with them.

If the UK leaves the EU with no deal, the position of UK citizens in other EU countries that rely on reciprocal healthcare arrangements will be determined by the law of the country in which they reside. Everyone has the right to emergency care in Spain. Photo: AFP

The Spanish health system guarantees emergency care to everyone, even if they are not EU citizens. This will not change after Brexit.

Yet the legal rights to non-emergency healthcare of people who are not EU nationals in Spain depends on their residency entitlements and their association with some kind of health insurance. A 2003 Spanish law (significantly amended in 2012) sets out who is covered by the Sistema Nacional de Salud, the Spanish NHS.

At the moment, UK citizens living in Spain are able to show permanent residency entitlement by reference to their EU citizenship, and to secure medical treatment as if they were Spanish by virtue of having paid UK tax and national insurance.

Like Spanish citizens, pensioners with annual incomes of over €100,000 pay 60% of prescription charges, capped at €60 a month, with lower co-payments (the amount that a patient contributes to the cost of their prescriptions) and lower caps for less wealthy pensioners.

Even if they have not paid tax and national insurance anywhere else, these UK pensioners are still covered by the Spanish NHS if their income is below a certain threshold, as are Spanish nationals, and other foreigners who are authorised to reside in Spain.

It is currently very easy for British citizens in Spain to enforce their EU law rights, and administrative formalities are relatively light: that’s the whole point of the EU’s reciprocal healthcare system.

What happens if there’s no deal

If Britain leaves the EU without a deal, UK citizens living in Spain would be entitled to receive medical care as “foreigners authorised to reside in Spain” under the 2003 Spanish law. But in practice, to fall under the protection of the Spanish law, they will have to show their residency entitlements. As foreigners, they will only be able to secure a residence permit if they also have a work permit. Without that, pensioners will not be protected. By contrast, at the moment all they need is the S1 form, which shows that they are entitled to healthcare in another country within the European Economic Area, provided under the reciprocal healthcare arrangements of EU law. S1 forms are currently given automatically by the UK, and are easy to secure.

Under the administrative formalities surrounding the 2003 act, foreigners must also prove that they enjoy coverage under some kind of health insurance. There are three ways they could do this. One would be to continue accessing the Spanish NHS by a special agreement – which costs €157 a month for over 65s and €60 a month for under 65s, and involves paying 100% of prescription charges. The second would be to use a private scheme, which will cost more, and will only really be practical for people who are healthy. The third would be to rely on their home state’s health system if it is recognised by Spain in an international agreement – but in a no-deal Brexit, this won’t apply.

The British pensioners living in Spain are – by and large – not wealthy people. They have made their homes in Spain trusting that the entitlements of EU law, and the administrative simplicity that follows, will remain in place. Kelly Hall at the University of Birmingham has been conducting interviews with some British pensioners who currently live in Spain. One man told her that he could not possibly contribute even a small amount towards his healthcare, and feels he will be forced to return to the UK.

Spain is the host EU country with the largest number of such retired UK citizens. But there are significant numbers in other countries too: Ireland, France and Italy in particular. The British NHS should prepare to welcome them home.