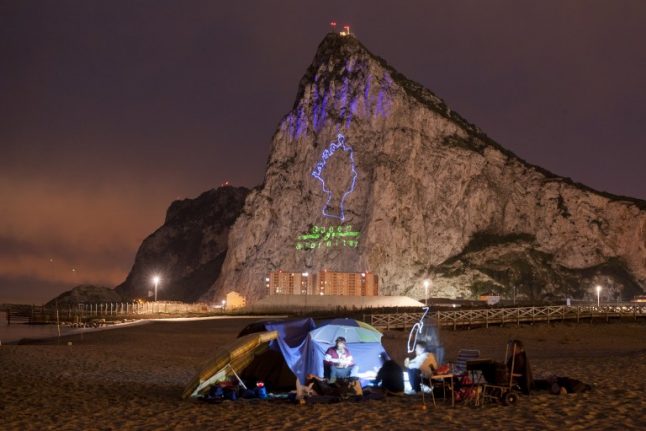 Fishermen eat on the beach with Queen Elizabeth II projected on the Rock of Gibraltar in background to mark her 90th birthday on April 21st 2016. Photo: AFP

Gibraltar was the first to declare its vote in June’s EU Referendum, returning a 96% vote in favour of Remain. But rather than set a trend for the night, Gibraltarians watched with nothing short of horror as the UK voted to Leave.

Gibraltar joined the European Economic Area with the UK in 1973 and will leave the EU with it. At a little over six square miles, this small territory is utterly dependent on the flow of goods and people across the border with Spain, not only for its prosperity, but for its survival. So Brexit is causing no small amount of concern among residents of what is colloquially known as the Rock.

We have been collecting the life stories of people on both sides of the border for several years in order to trace how a Spanish speaking population with strong kinship and cultural ties to Spain became so identified with Britain and its culture.

We have, to date, interviewed almost 400 people between the ages of 16 to 101 and from all religious, ethnic and economic backgrounds – including a sample from La Línea de la Concepción, the Spanish town on the “other side”.

With the referendum three years into our project, we are in prime position to gauge the reaction.

The border played a major role in the shift towards Britishness on Gibraltar that created the conditions for economic prosperity as well as providing a safety barrier from Spain which, for much of the 20th century, was politically repressive, if not violent and chaotic.

At the same time, the border is a bridge as much as a barrier. Many people sought refuge across the border; many others, mostly women, married Gibraltarian men with preferential access to employment in the colony (as well as higher salaries) in order to seek a better life. In more recent decades the border has represented the possibility of escaping the physical and social confines of Gibraltar, as well an economic life line.

With Brexit comes the possibility of this border being closed. It’s difficult to exaggerate the depth of feeling this has provoked in Gibraltarians. As one young woman put it:

It was a massive shock. I was really upset and I started crying. My friend was like: ‘What’s wrong?’ I [replied]: ‘You don’t understand what this means for my people.‘ My little Gibraltar is about to be shafted by Spain. More so than usual.

Their fears appeared to be confirmed on the very morning of the Brexit result when José Manuel García-Margallo, the Spanish foreign minister, said he hoped Brexit would lead to co-sovereignty and that the Spanish flag would soon fly over Gibraltar again.

An opportunity for Spain

There is no question that Spain sees Brexit as its best chance in half a century for gaining sovereignty over Gibraltar and some Gibraltarians are clearly anxious it might very well succeed. As one 20-year-old man put it: “With the whole Brexit thing, it’s kind of like ‘oh! We’re going to be Spanish. We’re going to be Spanish!’”. Our project has traced the way Gibraltarians have become increasingly distanced from Spanish language and culture and very wary of Spain’s political manoeuvrings – so the prospect of “becoming Spanish” is something of an anathema.

In 1969 Spain shut the border to pressure Gibraltarians to accept Spanish sovereignty but the effort backfired. Gibraltarians lost daily contact with Spain and became much closer to Britain and British culture. The border was opened in 1982 as part of the negotiations of Spain’s accession to the EEC but has remained a matter of contention between the UK and Spain.

In 2014, Spain imposed lengthy border queues in protest at an artificial reef created in what Gibraltar sees as its waters. It is widely understood that it was membership of the EU that prevented Spain from closing the border definitively and so the fears of the border closing again are very real. Membership of the EU, after all, is incompatible with closed borders.

Today, Gibraltar’s economy is mainly based on offering financial services to the rest of the EU, which depends on having passporting rights. There is no doubt that Gibraltar is a very wealthy community; there is equally do doubt that this wealth is highly dependent on its association with the UK and the EU for its financial sector and online gambling industry. It is also heavily dependent on labour crossing the border: up to 12,000 workers cross every day from Spain to work in the enclave. Gibraltar’s politicians are rather bullish in saying that Gibraltar can make a success of Brexit but there are huge questions that remain unanswered.

Whereas older Gibraltarians may express a grim sense of resolve at the border closing again, having gone through it once, the younger generation is much less sanguine. A border closure or restrictions today would have a much more dramatic effect and it’s worth noting that young Gibraltarians today have a more cosmopolitan view of the world than their parents. It is perhaps then not surprising that, in a survey of 16 to 18-year-olds conducted in February 2017, three quarters of them said they would consider leaving Gibraltar if the border were shut or difficult to cross.

Gibraltarians are very aware that they are a long way down the British government’s list of concerns when it comes to Brexit negotiations. Spain has said it would veto any special deal for Gibraltar. It is hardly surprising, then, that the Rock’s populace is deeply worried at the consequences of Brexit.