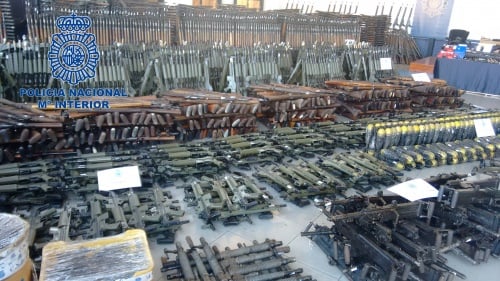 Police announced in January they had made a major weapons haul but only now released pictures and a final tally of the results of their operation against firearms trafficking.

They said they had launched their investigation following a shooting at the Jewish Museum in Brussels in May 2014 that killed four people.

The police pictures showed stacks of assault rifles and other guns side by side at a warehouse.

“The dismantled group, made up of five people who were arrested, legally bought out-of-commission weapons which they then reactivated and sold to organised crime groups and terrorist organisations,” police said in a statement.

Police also found an illegal workshop near the northern city of Bilbao with tools to manipulate and reactivate weapons as part of their operation carried out with the help of Europol.

The firearms were sold mainly in Spain, France and Belgium, Europol said in a separate statement.

“The seized weapons had an easy journey in the black market and posed a significant risk of being acquired by organised crime groups and terrorists,” it said. French national Mehdi Nemmouche was arrested in Marseille in southern France on May 30th, 2014, on suspicion of having carried out the attack at the Jewish Museum in Brussels.

Prosecutors said he was carrying a Kalashnikov, another gun and ammunition similar to that used in the shooting.

The attack prompted police forces across Europe to step up their investigations into illegal weapons sales.