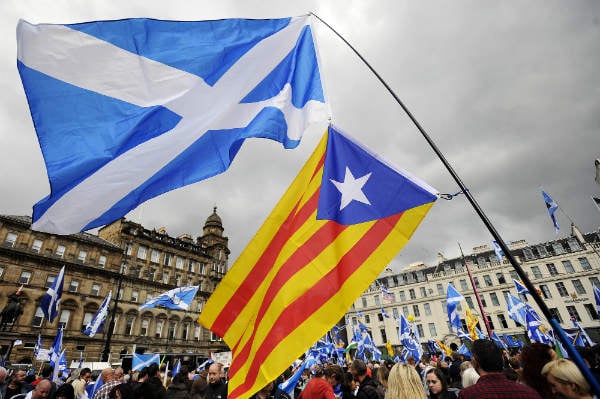 The Scottish Saltire (Top) and the nationalist flag of Catalonia fly side by side at a rally in Glasgow. Photo: AFP

Alfonso Dastis, the Spanish Foreign Minister spoke up to insist Scotland would have “to join the queue” to become a member of the EU if it did break away from the United Kingdom following a referendum.

The reasoning in Madrid is pretty obvious and comes as no surprise to anyone. It's the same line trotted out in the run up to Scotland's referendum on independence in 2014 – when 55 percent of Scots voted to stay within the UK.

Faced with its own troublesome secessionist challenge from Catalonia, the Spanish government is keen to shut down any talk that could prove encouraging to the northeastern region's own independence aspirations.

“Spain supports the integrity of the United Kingdom and does not encourage secessions or divisions in any of the member states. We prefer things to stay as they are,” Dastis said at a press conference during a visit to Peru.

He explained that if Scotland were to split from the UK, whether it was before or after the UK’s exit from the EU would make no difference.

A newly independent state of Scotland could not expect any special treatment because it was only an EU member as a part of the UK and as such would have to reapply.

Scotland “would have to queue, meet the requirements for entry, hold negotiations and the result would be that these negotiations would take place,” he said.

In such circumstances, entry of a new member into the EU is outlined in article 49, which requires unanimous decision among all member states, a rule which effectively gives each country the power to veto a new member.

Despite Dastis’ outlining Spain’s position on Scotland joining the queue, the government of Mariano Rajoy has never specifically stated its position on whether it would stand alone and veto Scotland’s entry.

Although Spain clearly discourages secessionists, it would be hard pushed to justify a refusal to allow a newly recognized state to join the EU provided it had broken away in a lawful way.

Although Scotland can be seen as trailblazers in the independence movement where developments are keenly watched by Catalans, Spain’s Prime Minister has always been at pains to point out the differences in their situation.

Madrid’s opposition to a Catalan independence referendum is primarily based upon a clause in the Spanish constitution which states that Spain is “una e indivisible”, one and indivisible, and that the territory of the Spanish state is the patrimony of all of the people of Spain and therefore no one region can unilaterally make a decision that affects the unity of the whole.

For that reason Madrid claims a Catalan independence referendum would be unconstitutional, and has blocked one at every turn, even taking the former regional president to court for staging a symbolic vote.

It is on the same grounds that Spain has refused to recognise the independence of Kosovo –declared unilaterally by Kosovo – which Serbia claims is unconstitutional according to the Serbian constitution.

However, none of this applies to Scotland’s independence bid.

Scottish independence, if and when it comes, will have to be entirely legal and constitutional. It will have to be recognised by the Westminster Parliament. That means that Spain cannot be opposed to it for reasons of legality.

They would therefore struggle to come up with reasonable grounds to veto Scottish membership of the EU.

Scotland’s first referendum in 2014 was conducted with the permission of Westminister, and any future vote would have to take place in a similar framework.

This is one of the many reasons that Madrid persistently points out that Catalonia and Scotland are very different cases.

In fact last week, Esteban González Pons, an MEP and senior member of Rajoy’s Popular Party, admitted that Spain would not automatically veto Scotland’s entry into the EU.

“If Scotland wants to come back [into the EU] they have to begin the procedure as would any other country.” Pons said, keeping strictly to the party line.

But asked if Spain would want to veto Scotland he said in the interview with a BBC correspondent in Brussels: “No. If they are thinking about Scotland the Catalonian situation is very different to the Scottish situation.”

So `perhaps, if and when it comes to it, Spain won't ruin Scotland's EU dreams after all.