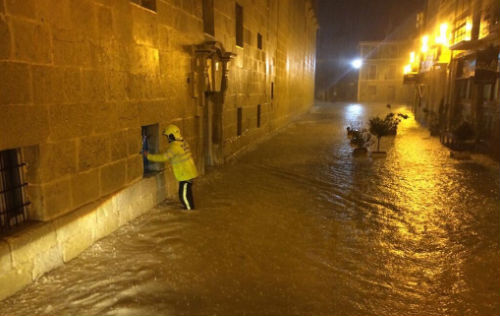 This photo was taken by an Alicante fireman. AlvaroB154 / Twitter

Alicante saw half the average annual rainfall in just one day as the southeast of Spain saw the worst of the storms to hit the peninsula on Monday.

More than 150 litres of water per square metre was recorded in Alicante, a province that sees a typical annual rainfall of 311 litres per square meter.

The torrential rain closed schools across the province and Spain’s weather agency predicted that the stormy weather was set to continue on Tuesday.

The region has experienced a winter of extreme weather. In January the Costa Blanca received a rare snow fall sending people out onto the beaches to make snowmen instead of the usual sandcastles.