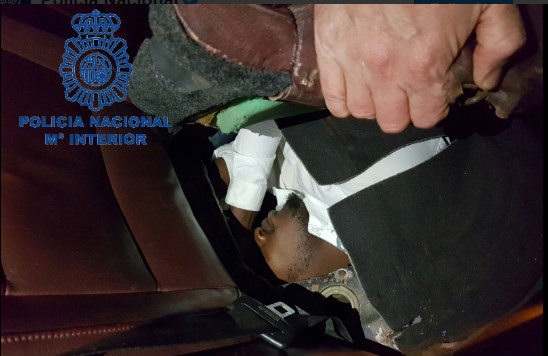 Two young Guineans, concealed within a car, attempted to cross the border into the Spain's north African enclave of Ceuta on Friday night when they were discovered by officers from the National Police.

Both migrants showed symptoms of asphyxiation, one was travelling underneath the car’s seat and the other was squeezed into a secret compartment behind the dashboard.

The driver of the car, a 36-year-old man from Ceuta, has been arrested and faces charges of human trafficking.

According to the National Police, when the driver was asked to show his documentation at the Tarajal border crossing, officials noted that he was he was incoherent and nervous.

This raised suspicions of police which led to them carrying out a thorough search of the Volkswagen Golf.

At once the police noticed that the car displayed signs of manipulation with clear changes having been made its frontal section and its seats.

One of the officers opened the glove compartment and discovered a woman hidden inside – she was suffering symptoms of asphyxiation and was close to fainting.

Moments later, a young man was discovered folded into the underneath the rear seats of the car.

The driver and the two migrants have been taken into custody.

This sort of people discovery has become more and more common at Spain's north African borders, with people having been found hidden inside secret compartments within cars as well as cramped up within suitcases. Scenes of desperate migrants scaling the border fences that separate Morocco from the Spanish enclaves of Ceuta and Melilla have become all too common in recent months.

Human rights groups have slammed Spain for their treatment of refugees and migrants at the border and for conditions in the overcrowded immigration centres.