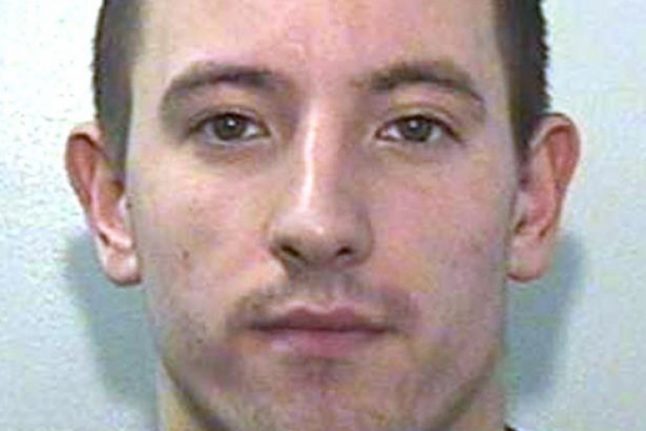 Gareth Bryan Edwards, 25, was cornered while enjoying a night on the town in the Costa Blanca resort on Friday after officers recognized his face from posters that had been distributed across Spain.

He was stopped by officers outside a British pub in Benidorm and when asked to show ID produced a passport with a photograph that “did not appear to look like him”.

When officers asked him to accompany them to the police station to further verify his identity, he pushed them and ran off through the built up tourist zone of Benidorm.

He was eventually tracked down hiding in an empty swimming pool at an apartment block.

Greater Manchester Police had put out an appeal to help trace Edwards after he absconded to Spain breaching the terms of his early release from prison last April.

His face appeared on a list of most wanted fugitives drawn up by Spanish police last November, when he was described as “very dangerous and possibly armed”.

Edwards, who has links to Aylesbury and Salford,  appeared on the list alongside a known Italian mafia member and a Tunisian murder suspect.

In a statement released by Spain’s National Police last November with the list of the most wanted he was described as: “Gareth Bryan Edwards, 25, from Aylesbury in the United Kingdom.

“Wanted by the British authorities through a European Arrest Warrant with a maximum anticipated punishment of three life sentences for the crimes of robbery with violence and intimidation.

“He is a very dangerous person and is probably armed and carrying drugs.”

Police said that he was found to be carrying cocaine when he was arrested on a European Arrest Warrant on Friday. A judge has already remanded him into custody pending the extradition request.