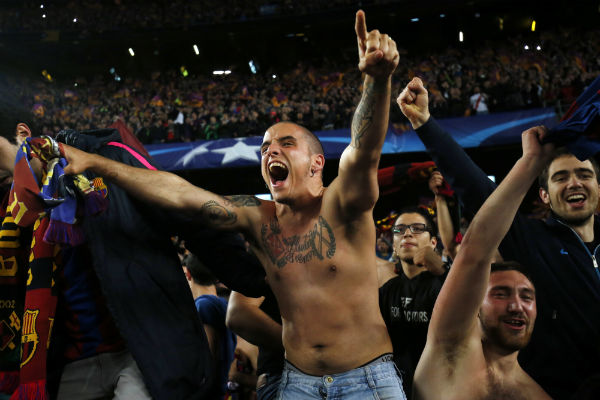 The Brazilian scored an 88th-minute free kick and a penalty in the 91st before setting up Sergi Roberto's clincher in the fifth minute of injury time, sealing it 6-1 as Barcelona overturned a 4-0 first-leg deficit.

The result, which sparked delirious celebrations at Barcelona's 99,000-capacity Nou Camp stadium, sent the Spanish giants storming into the quarter-finals at the cost of the stricken Paris club.

“This is the best game I have ever played. For what it meant, for what we experienced and because I am in great form,” Neymar told BeIN Sports.

“I know that we have made history. A team like this can do anything.”

The sensational win recalled Manchester United's injury-time double to win the 1999 title against Bayern Munich in the same stadium, and Liverpool's victory in the 2005 final after being 3-0 down to AC Milan at half-time.

“It is a difficult night to explain with words,” said Barça boss Luis Enrique, who will leave the club at the end of the season.

“It was a horror movie, not a drama, with a Camp Nou that I have seen very few times as a player or coach.
“What defines this victory is the faith that the players and fans had.”

But the defeat raised questions over the future of PSG coach Unai Emery, as club president Nasser Al-Khelaifi ominously called it “very hard to accept”.

“This is a nightmare for everybody. Is Unai Emery still credible? This is not the moment to talk of this. After the game, we are all upset,” said the Qatari. Despite Luis Suarez's early opener, a Layvin Kurzawa own goal and Lionel Messi's penalty, Barça looked down and out when Edinson Cavani volleyed home what seemed to be the vital away goal for PSG.

However, Neymar restored Barça's belief as he firstly fired home a sensational free-kick two minutes from time and then converted from the penalty spot.

And substitute midfielder Roberto became the unlikely hero when he stretched to turn home Neymar's sublime chip over the defence, leaving the score 6-5 on aggregate as the crowd dissolved into ecstasy.

“I threw myself at it with everything,” Roberto told BeIN Sports. “We left Paris very down and now this is incredible.

“We were prepared for all this. The fans were like 10 extra players and in the end this is all for them.”

Midfielder Ivan Rakitic said Barça had defied the critics after their first-leg humiliation in Paris three weeks ago.

“It's crazy. After Paris, many people spoke hard about our team but tonight was special, we made history,” the Croatian told BT Sport.

“We know we are the best team in the world.”

PSG coach Emery admitted his team went to pieces in the final minutes, but said they were badly affected by the two second-half penalties given by German referee Deniz Aytekin.

“In the second-half it changed. The (Messi) penalty got them off to a great start, but I was already calmer because I could see the team was responding better, were better positioned on the pitch and could do damage,” said the Spanish coach.

“We had chances to make it 3-2 and then the refereeing decisions, I don't know if they were right or not, but for sure they damaged us. Then in the last two minutes we lost everything we had recovered in the second half.”

“I would say to the hospitals of Barcelona to hire nurses,” said the father of two. “Tonight people will make a lot of love.”