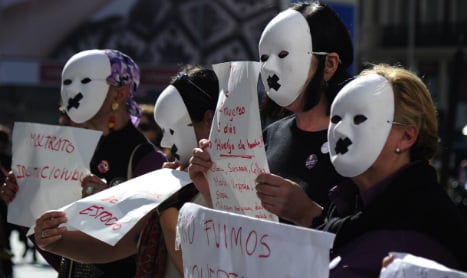 But women still don't enjoy parity with men in Spain and there is a way to go to bridge the gender gap.

1.   Inequality in the workplace Spain’s female executives earn 16 percent less than their male counterparts, although this is better than the EU average salary gap of 23.4 percent acccording to the latest Eurostat data.

The percentage of women in managerial positions is 37 percent and by far the majority of Spain’s top earners are men. Although men represent 54 percent of all salary earners, they occupy the top jobs, with data from Spain’s finance ministry showing that 82 percent of positions where salaries are more than ten times the minimum wage are held by men.

2.      Women are still officially described as “the weaker sex”

The definitive dictionary of the Spanish Language, as published by The Royal Spanish Academy (RAE), carries a definition for the phrase “sexo debil” – the weaker sex – as “women in general”.

While the term “the stronger sex”, is of course a definition of “men in general”.

But after a campaign launched by teenager Sara Flores Romerothat has garnered almost 100,000 signatures on change.org, the RAE has agreed to revise the definition in its next edition published in December.

Spain still has a tax of 10 percent on feminine hygiene products – which is the same rate for caviar – putting millions each year into government coffers.

Other products, like intimate gels and hygienic wipes, carry a 21 percent tax.

Last year a group of women began a campaign entitled “Tampons from Canada” – a protest  that involved importing tampons from the North American country where such items are not considered a luxury and are tax-free.

“Women of Spain, we already bleed enough, so let’s unite so that the government of Spain does not make us bleed more,” the group says in a YouTube video.

4.    Women do most of the housework and childcare This advert for Cillit Bang was banned because it reinforced the stereotype that only women do the housework.

Spanish women also take on the majority of the household chores and spend much more time on unpaid tasks such as childcare or caring for elderly relatives, even if they too hold down a job.

Working men spend on average two hours per day on household activities, while working women spend double that  – over 4 hours every day on household tasks, according to data collected by Spain’s National Statistics Institue (INE)

They also do around 70 percent of unpaid care within the home – either of children or elderly relatives –  according to data collected by Spanish think-tank Fedea. Women in Spain are still being killed at the hands of their partners and ex-partners. In the first two months of 2017, 17 women were murdered by the men in their lives.

During 2016, a total of 44 women were killed as a result of “gender violence” and campaigners believe the Spanish government should be doing more to prevent and punish such crimes.

A group of 16 women are currently camping out in Madrid’s Puerta del Sol on hunger strike to demand harsher sentences for the perpetrators of domestic violence.

But it’s not all bad news Things have certainly improved in leaps and bounds for women since Spain’s transition to democracy on the death of fascist dictator Francisco Franco in 1975.

In the last general elections in June 2016, more women than ever before were voted into the Spanish parliament when 138 women won seats in the 350-member congress.

That means women make up 39.42 percent of MPs in Spain’s national parliament above the EU average of 37 percent.

READ ALSO: Women in Spain urged to strike, march… and dance the merengue