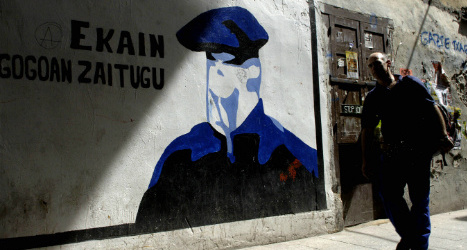 File photo of a mural in support of Eta in northern Spain. Photo: AFP

The Guardia Civil police force discovered seven drums of explosives in a rural area near the town of Irún on the border with France, the ministry said in a statement.

“The deposit has not seen recent activity and it is thought that it was used by the terrorist group to supply material to an Eta command unit in the Irún area,” the statement said.

Police have cordoned off the area and explosives experts are analysing the material that was found.

The operation is continuing and the interior ministry said it could not rule out that other explosives caches may exist in the area.

“The struggle against terrorism brings results. The Civil Guard uncovered an explosives cache that appears to be from Eta” – Juan Ignacio Zoido, Spain's Interior Minister.

Founded in 1959, Eta waged a violent decades-long campaign for an independent Basque homeland in northern Spain and southwestern France, and is blamed for the deaths of more than 800 people.

The outfit has been severely weakened in recent years after hundreds of its members were arrested and some of its weapons were seized.

It declared a ceasefire in October 2011 but has refused to give up its weapons.

READ MORE Out of the dark: Five years on from Eta ceasefire

Five people were arrested and arms seized in December in a joint raid by Spanish and French officers near Bayonne in southwest France which officials in both nations described as a “blow” to Eta.

But it subsequently emerged that those arrested included the head of an environmentalist group, a former head of the Basque Country chamber of agriculture, and a female journalist.

The head of French rights group the Ligue des Droits de l'Homme (LDH), Michel Tubiana, condemned the raid, saying the aim of the activists was to destroy Eta arms and to hand them over to authorities.

Eta is seeking to negotiate its dissolution in exchange for amnesties or improved prison conditions for the roughly 400 Eta members held in Spain and France.