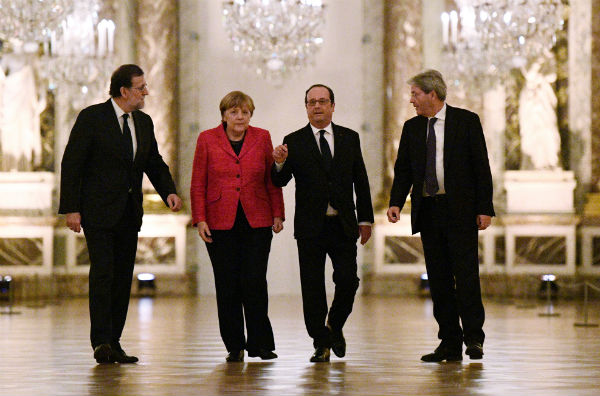 Their meeting in the gilded splendour of the Palace of Versailles was spurred by calls to strengthen the EU in the face of Britain's exit from the bloc, eurosceptic populism and fears over US President Donald Trump's strategy for Europe.

“For this reason I support new forms of cooperation,” he said at a joint press conference with the other leaders.

“#Spain generates confidence. We'll find solutions together with our European partners to overcome the challenges that Europe has ahead” – Mariano Rajoy.

Some EU member states could “go more quickly” and “further in areas such as defence and the eurozone, by deepening the economic and monetary union, and by harmonising fiscal and social policy,” Hollande said.

Other EU members could choose to opt out of measures intended to deepen integration, he added.

Rajoy said his country was ready to go further with EU integration. “Our countries must make choices,” he said. “Because without choices, we will undermine the EU.”

France and Germany, which are often described as the European Union's “engine”, had already backed the idea of a multi-speed Europe.

Italy, Belgium, The Netherlands and Luxembourg had also signed on to the idea, as they worriedly eye the rise of anti-European parties.

Merkel urged Europeans to “have the courage to accept that some countries can advance more rapidly than others”, and that that should not stop members on a slower integration footing from catching up.

“We must be able to move forward,” she said.

No concrete project was announced after the meeting in Versailles. There had been speculation the leaders would shy away from making specific proposals to avoid antagonising member states who resist the multiple-speed concept, including many in eastern Europe.

European Commission chief Jean-Claude Juncker has laid out five possible scenarios for the EU after Britain leaves. They include reducing the EU to just a single market, returning some powers to member countries and creating a “multi-speed” Europe.

“In #Versailles. Constructive spirit, loyal collaboration and full trust in a future of opportunities for the EU” – Mariano Rajoy.

EU leaders are now considering Juncker's options ahead of a summit in Rome on March 25th marking the bloc's 60th anniversary, where they will make their own declarations about the way forward after Britain's expected departure in 2019.

That date, combined with the rise of populist and nationalist figures, has triggered a wave of angst about Europe's future.

The EU faces legislative elections in The Netherlands this month, followed by presidential elections in France in April and May.

Far-right candidate Marine Le Pen is widely forecast to reach the runoff in the French vote, while the party of firebrand anti-Islam MP Geert Wilders is expected to perform strongly in the Dutch race.

Merkel, meanwhile, is facing pressure from the hard-right populist party Alternative for Germany.

Trump's nationalism and expressed scepticism about NATO has also stirred concerns in Brussels. On January 31st, the president of the European Council, Donald Tusk, listed the Trump administration as a “threat” facing the bloc, along with China, Russia and radical Islam.