The bus, paid for by ultra-right group Hazte Oir, began touring the Spanish capital this week before planned visits to other cities across Spain, with its campaign against transgender awareness and swiftly provoked outrage.

The message on the bright orange bus reads: “Boys have penises, girls have vaginas. Don’t let them fool you. If you’re born a man, you’re a man. If you’re a woman, you will continue to be a woman.”

The transphobic message comes in response to a campaign launched earlier this year by Chrysallis, an LGBTI group that wanted to raise awareness of children with gender identity issues.

Last year they produced posters across the Basque Country using the slogan ‘There are girls with penises and boys with vulvas’, a message that enraged Hazte Oir, which launched a failed petition to ban the adverts. The poster from Chrysallis Euskal Herria designed to raise transgender awareness among children.

“Our objective is to denounce laws of sexual indoctrination that various regions have passed to promote sexual diversity among minors, threatening freedom of education, and the right of parents to educate their children [as they see fit],” read a statement from Hazte Oir about their latest campaign.

The group explained that the bus was designed to promote their pamphlet “Did You Know What They Want to Teach Your Child at School?” which claims to highlight the “truth” of gender diversity laws.

The pamphlet features a cover of two children raising their arms in a Nazi salute before a rainbow flag.

The bus was quick to stir controversy with LGBTI group Arcopoli considering bringing legal action. The Socialist parliamentary group called on the public prosecutor to investigate whether it constituted a hate-speech crime and  there was cross-party condemnation of the campaign at a Madrid council meeting.

On Tuesday evening Madrid city council authorized the seizure of the bus as it failed to meet municipal standards which dictate that advertising can only appear on municipal vehicles.

The council also indicated that an investigation had been launched to determine whether equality laws or those regarding hate-speech had been breached. 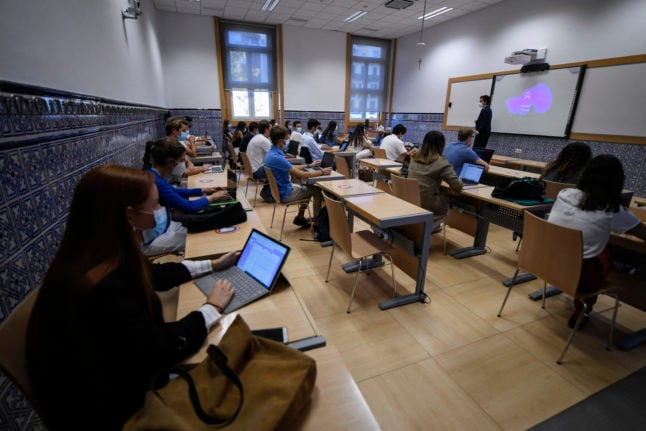 EDUCATION
How Spain is changing its ESO secondary education system

EDUCATION
How Barcelona’s ‘bike bus’ scheme for schoolkids is getting noticed worldwide
Url copied to clipboard!