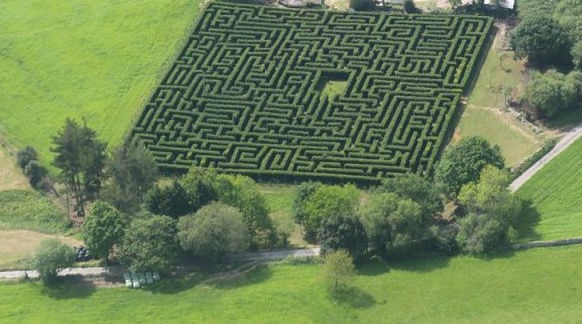 His solution was to build Spain’s largest maze with his unsold trees, a plan which would also provide his unemployed daughter with a business interest and a respectable salary.

The maze is 5000 square metres, almost half the size of a football pitch, and its 4000 trees make up almost four kilometres of pine-walled streets. “There could be larger mazes, those built from maize which last for a few months, but of those that are permanent, this is the largest,” said Perez.

The construction of the maze has caused a stir in Cantabria. “At first people said that it was a plantation, they did not know that it was a maze and when they found out they were surprised.”

Four years ago, he began to put into practice the idea which he had dreamt of for some time. Perez and his daughter began by sketching out the maze on paper taking inspiration from similar initiatives then friends and neighbours helped him to plant the trees.

There is a recurring joke amongst those who know about the maze “many say, especially on social media, that they would put their mother-in-law there,” Perez quipped in an interview with Spanish newspaper El Comercio.

His daughter, Monica, will take charge of the maze’s management and will set up a bar next to its entrance. It is Perez’s hope that the money earned at the bar and from maze admissions will provide her with a respectable salary.

The average time to solve the maze is just over an hour with the quickest times taking approximately half an hour.

Perez has not made a decision about the entry price but does not want to charge more than four euros so that families won’t be put off.

Those who purchase tickets for the maze will also receive the owner’s telephone number in case they cannot find their way out.

The maze will be open to the public from April 8th and is receiving considerable support from the city council. It is hoped that the maze will bring an economic benefit to the area.