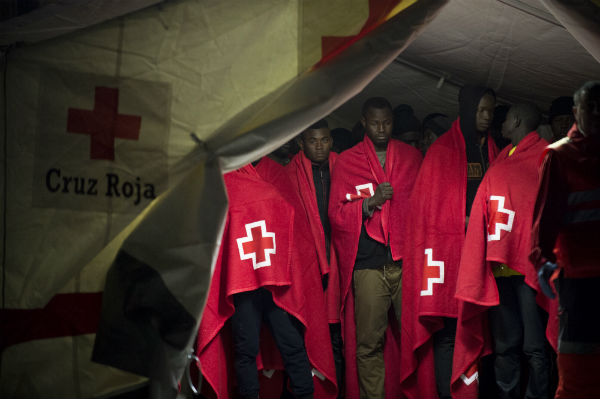 Sunday evening was particularly difficult with five boats carrying 210 people from sub-Saharan Africa rescued, while the remaining 47 were recovered from their dinghies on Saturday afternoon, a spokeswoman for the coast guard told AFP.

They were all taken to various ports in southern Spain such as Almeria and Motril, where they were attended to by the Red Cross.

Some were suffering from hypothermia but none were in any serious condition, the spokeswoman said.

The coast guard also said they had pulled a body from the sea not far from the small stretch of water between Gibraltar and Morocco, but they were not able to say whether it was that of a migrant.

According to the International Organization for Migration, around 1,000 migrants arrived in Spain by sea between January 1 and February 22, and 38 did not make it, dying on the way.

Another 13,000 crossed the Mediterranean to Italy and Greece.

The Spanish territory of Ceuta in northern Morocco, which with the enclave of Melilla further east forms the only land frontier between Africa and the European Union, has also been the scene of unrest recently as hundreds of migrants have stormed the border fence.

On February 17th, nearly 500 migrants managed to get through the double wire, six-metre (20-foot) high fence in one of the biggest breaches since the border barrier was reinforced in 2005.

A few days later, more than 350 people forced their way through again after breaking access gates with shears and hammers.