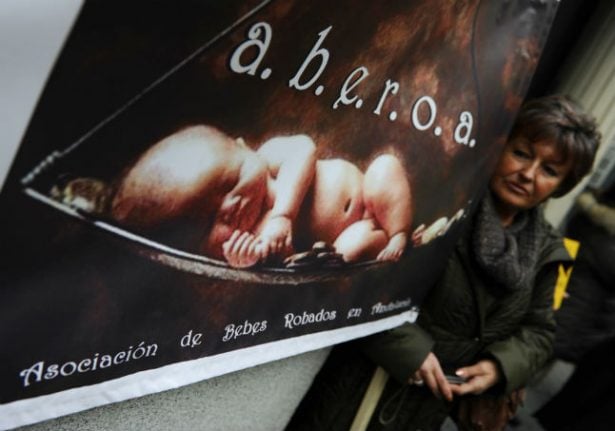 A woman next to a poster from Andalusia's Stolen Babies association during a demo. Photo: AFP

In a court document obtained by AFP on Tuesday, a judge gave the green light for the trial of Eduardo Vela to go ahead — the first in the dock over the “stolen babies” scandal that shook Spain when it eventually came to light in 2010.

The practice is thought to have begun after Francisco Franco came to power in 1939 following Spain's civil war pitting Republicans against Nationalists loyal to the general.

Doctors and nurses would reportedly steal babies from parents deemed politically dangerous to the dictator or born out of wedlock, and give them to families in favour of the regime.

The practice was gradually extended to include the theft of newborns from poor families for adoptive parents in Spain and abroad.

Vela is suspected of having taken part in the 1969 theft of Ines Madrigal, now in her late forties, who accuses him of having forged her birth certificate so that her adoptive mother appeared as her biological parent.

Her adoptive mother, who has since passed away, had allegedly later confessed to Madrigal that she worked as a volunteer in a convent and a priest had put her in contact with Vela who gave her the baby.

A date has yet to be set for the trial of the former gynaecologist, who is now elderly and faces charges of child abduction and falsifying official documents.

Angel Casero of the “Onwards Stolen Babies” association that campaigns on the issue welcomed news of the trial.    “It's really important as this paves the way for more cases and for people to realise that what we're telling them is the truth,” he told AFP.

Estimates of the number of children who were allegedly taken from their parents vary from thousands to several hundreds of thousands.

New mothers were often told their babies had died within hours of birth and the hospital had taken care of their burials.

Victims have filed official complaints, but the judicial process has been slow in a country that has yet to fully come to terms with its civil war and Franco's subsequent dictatorship.