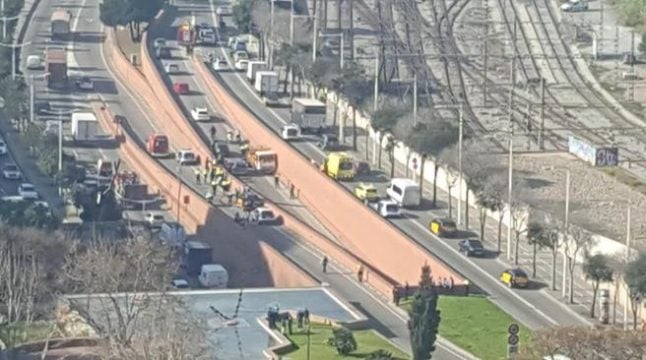 The truck was stopped on the Barcelona ring road. @uklanor / Twitter

Fears that the 32-year-old was attempting an attack similar to those that took place last year in the French city of Nice or Berlin were soon put to rest when Interior Minister Juan Ignacio Zoido tweeted “it was not a terrorist act”.

“The detained driver of the stolen butane truck in Barcelona has a history of psychiatric problems,” he said.

The man was unarmed and was taken to a hospital for a check-up, regional police chief Joan Carles Molinero told a news conference.

He was identified by a source close to the investigation, who refused to be named, as Joakim Robin Berggren.

Court documents in Sweden seen by AFP revealed he had served prison time before 2012, though why he was jailed is not known as these details are erased from criminal records after five years.

He then ended up back in court twice for driving under the influence of drugs, taking drugs and for carrying a banned weapon — in this case brass knuckles — and was fined for each offence.

The trace of two gunshots were visible on the windscreen.

During the chase, which lasted several kilometres, several gas cylinders fell off the truck as the man drove at high speed.

Three people were lightly injured during the chase, including a Brazilian woman whose leg was struck by one of the bottles that fell from the truck, Molinero said.

Mireia Ruiz, a woman who saw the incident from her home nearby, said the driver ignored people screaming at him to stop as he sped down the wrong side of a ring road.

“When people shouted at him, he would laugh and make offensive gestures with his hand,” she told AFP.

The truck was stopped when it crashed against the wall of a motorway, and the driver was then detained.

Molinero said there was “no indication whatsoever that he was planning a terrorist attack”.

“We are working on the possibility that it could be a person with psychological imbalances or who has consumed substances,” he said.

Spain has been mentioned on extremist websites as a possible attack target for historical reasons, given Muslims ruled in the country for close to eight centuries until 1492.

The country increased its terror alert to category four on a five-point scale in 2015 following attacks in France, Tunisia and Kuwait.