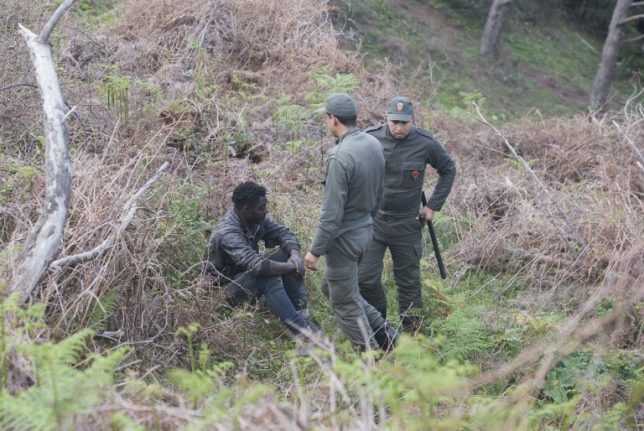 Moroccan authorities arrest a migrant on February 18th 2016 after he forced his way through a fence between Morocco and the tiny Spanish enclave of Ceuta. Photo: AFP

Adam, a 17-year-old from Guinea, failed and suffered a dangerous concussion in the process — but he has not given up his dream of reaching European Union territory.

“It was night-time and I was very scared. I was hit on the head as I climbed the fence and lost consciousness,” he said, lying in a hospital bed in the northern town of Tetouan, a blood-soaked bandage on his head.

His shredded clothes still bear the marks of that traumatic night, when hundreds of migrants stormed the border in a final attempt to reach Europe after months, if not years, of travel across Africa.

“I left school and came to Morocco last July, passing through Mali and Algeria,” he said.

He spent several months in a run-down suburb of the capital Rabat before heading for a forest near Ceuta, where he lived in the most basic conditions.

“It was really tough. It was very cold at night and we sometimes went two days without eating anything,” he said.

An activist from a local group helping migrants arrived to give him some clothes and check on his condition.

“We go to hospitals in the region every day to visit migrants who were injured trying to cross the border,” said Rajae Marsou, a doctor and vice-head of Manos Solidarias (Hands in Solidarity), an NGO based in Tetouan.

“We do medical follow-up and try to accompany them in this difficult period,” she said.

Adam thanked her and asked for a telephone to call his relatives. He said they knew he had made the attempt for his future.

“I am ready to do anything to reach Europe and provide for my family,” he said.

Like Adam, dozens of people hoping for a better life were hospitalised in three towns in Morocco's north. Others boarded buses on Friday afternoon in the border town of Fnideq, near a market considered the hub of the sale of contraband products from Ceuta. From there, they headed south, several witnesses said.

Some of the migrants escaped the security forces and hid in the nearby forest of Belyounech.

On the run after yet another attempt to force their way across the frontier, they headed for a small grocery store in the village of El Bioute, a few kilometres from the forest.

Wary of the police, the migrants — mostly in their 20s — move discretely in small groups, often with people from their own countries. A group of eight Cameroonians came to buy provisions in this tiny store with a roof of sheet metal.

“We have a tough life in Morocco, just because we are trying to reach Europe, find a way to Europe, for a better life. Life in Morocco doesn't treat us well,” said Youssouf, 27, as he bought biscuits, cakes and energy drinks.

“Life is not easy. We do not have a house and we cannot work. Fortunately our brothers who have gone to Europe send us money,” said Ismael.

Both from Cameroon, they started their long and gruelling odyssey three years ago, wandering through several Moroccan cities before trying their luck at entering Ceuta.

“We have tried to cross the barrier four or five times,” said Ismael.

A cloud of smoke rose from the nearby forest: the police had just burned the migrants' camp.

“I carry in my body the wounds of my attempts (to cross) and blows by the security forces,” said Aminou, a 22-year-old who wore a black jacket and the jersey of Cameroon's national football team.

“But I will continue to fight to have what I want and help my family,” he said.

At that moment, two officers from the local security force suddenly appeared, running towards the migrants.