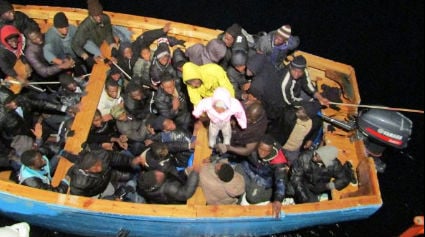 Forty-seven men, 11 women and a baby from sub-Saharan Africa were saved some 300 kilometres (160 nautical miles) south of the island of Grand Canaria, a spokeswoman for the coast guard told AFP.

The migrants' sea journey likely began in west Africa. They were taken to the Grand Canaria port of Arguineguin after their rescue.

While the focus has often been on the migrants and refugees heading to Europe via Turkey, Greece and Italy, a smaller number also head for Spain.

On Wednesday, another boat heading from Morocco towards the southern Spanish city of Cadiz was intercepted by a Moroccan patrol vessel.

Two people were rescued, but nine others were reported missing and feared dead, the Spanish coast guard spokeswoman said.

The migrant vessel was found near the Moroccan coast, as the would-be asylum seekers made a desperate bid to cross the Strait of Gibraltar despite poor weather, she said.

More than 13,000 migrants arrived in Spain in 2016, 8,100 of them by sea, the International Organization for Migration says.