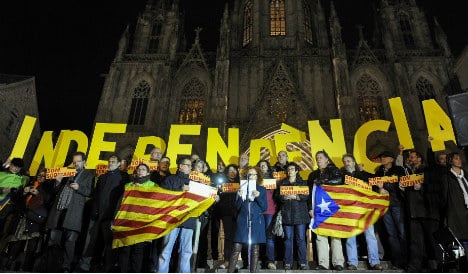 The parliament of Spain's wealthy, northeastern region, which has a majority of separatist lawmakers, had adopted the resolution in October, pledging to hold a vote in September 2017.

But after suspending it in December, the Constitutional Court in Madrid said Tuesday that it had cancelled it altogether, ruling it “unconstitutional”.

Separatists in Catalonia have for years tried to win approval from Spain's central government for an independence vote like Scotland's 2014 referendum on independence from Britain, which resulted in a “no” vote.

Catalonia's former president Artur Mas tried to hold such a referendum, which was also banned by the court.

He countered by calling a symbolic, nonbinding independence vote, which was also stopped by the court.

But in November 2014 he went ahead anyway, with more than 80 percent choosing independence – though just 2.3 million people out of a total of 6.3 million eligible voters took part.

Mas's move got him and two others charged with serious civil disobedience and misconduct, and they stood trial last week. Prosecutors want Mas and his former associates banned from holding public office for nine to 10 years.

The court's 2014 ban on holding a referendum is permanent, but the Catalan parliament had decided to give it another try last October – ultimately failing.

Prosecutors will now decide whether regional officials such as parliamentary speaker Carme Forcadell “committed an offence by approving the decision” to submit the resolution.

Their long-standing demands for greater autonomy have been exacerbated by Spain's economic downturn, with many Catalans resenting the taxes they pay to the central government in Madrid to subsidise poorer regions.

Calls for outright independence have increased in recent years, and polls show that Catalonia, which accounts for almost a fifth of Spain's economic output, is roughly split in half over breaking away.