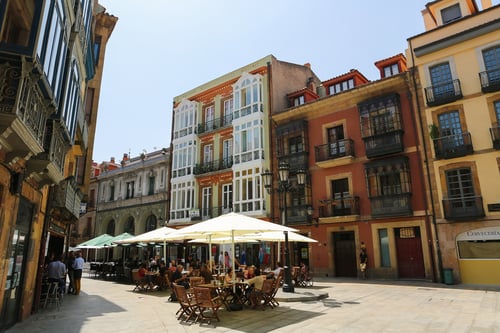 It has beautiful parks Campo San Francisco is the green heart and lungs of the city. An ancient, elegant park, throughout all seasons which is home to its very own ostentation of peacocks, wide promenades, fountains and of course statues… (see next point)

For more green space, head up to Monte Naranco, a hike that takes you past pre-Romanesque churches, to the 30-metre-high statue of Christ, where you will be rewarded with stunning views of the city and the often snow-peaked mountainscape beyond.
Around every corner is a statue Scattered across the parks and streets of the city is a varied collection of statues and sculptures. In fact the whole city is like a giant open-air museum, filled with statues, including a lifesize one of Woody Allen himself – who has proclaimed Oviedo as his favourite Spanish city.

READ: Woody Allen drops in on his favourite Spanish city

There are around 130 statues to be found across the city, some which will take you by surprise but all are designed to delight and charm.

Explore its many plazas Watch the world go by in any one of Oviedo´s romantic squares. The historical square of Plaza Paraguas in the heart of the old quarter is dominated by a large concrete umbrella, formerly used to protect an open air market from the elements.

Nearby is the Plaza El Fontan with a bustling indoor food market and picturesque porticoed square. But there is also the Plaza de la Catedral, Plaza Trascorrales and the Plaza del Ayuntamiento, among others, all of which are worth a visit. Nestled between the coast and mountains of this verdant rain-soaked region, Oviedo boasts its own recognizable gastronomy. Ranging from hearty winter stews of fabada and pote asturiano to more than fifty varieties of cheese, it is also recognized for producing exquisite honey and a delicious range of embutidos.

And we haven’t even started to describe all the wonderful seafood available; freshly caught and brought in daily from the nearby Atlantic coast.

But for those who need to satisfy a sweet tooth, don't leave without trying Oviedo's famous carbayón, a sickeningly sweet pastry made from egg, almonds, sugar, and cognac, coated in a lemon and cinnamon icing. Delicious!

You will love its cider

Cider is the regional tipple and there are so many varieties to try at the specialized sidrerías where you can dedicate yourself to the task. There is an art to serving cider here which involves pouring it into a glass from a great height in order to oxygenate the drink and give it freshness and fizz. The best cider pourers are able to achieve the task while nonchalantly looking the other way. There’s an art to drinking it too: down in one before passing the glass on to a companion.

It's steeped in history

This is Spain’s oldest Christian city and one of the most important stops on the pilgrimage route to Santiago de Compostela. Founded in the 8th century, Oviedo has a rich historical and cultural legacy that oozes from the narrow cobbled streets of the old city with its convents, palaces and churches of caramel coloured stone.

In the green hills above the city, discover pre-Romanesque churches dating from the 9th century, now recognised as a UNESCO world heritage site, and you can't miss the huge Gothic Cathedral that dominates the centre of the old walled city. Oviedo is a music-lovers dream with weekly concerts and regular dedicated festivals that has every musical taste catered for, whether its pop, rock, classical or jazz, to say nothing of the choirs and the bag-pipes. The annual fiesta held to honour San Mateo, the patron saint of the city, sees stages erected across Oviedo’s squares for ten days each September.

You'll want to stay out all night. StockPhotoAsturAlong with hundreds of restaurants, Oviedo is brimming with cafes, bars and clubs many of which can be found in and around the winding streets of the old quarter. After dining in the atmospheric Calle Gascona (Bulevar de la Sidra) or surrounding plazas, you can wend your way past the catheral and into the night. Things really get going around midnight, so you should have time to let that late night supper go down with a traditional Asturian digestivo (try orujo de hierbas, cream de orujo).

The city may be modest about the expanding cultural movement here – perhaps to prevent an influx to its Paraiso Natural. If a long weekend visit tempts, you´ll be amazed at the variety of cultural events and activities on offer throughout the year. Foodies will delight at the almost weekly gastronomy journadas/festivals in and around the city and region and music fans are spoilt for choice. Art buffs can visit the newly refurbished and extended Fine Arts Museum, one of Spain´s best art collections, consisting of 15,000 pieces from the 14th to 21st centuries, with works by El Greco, Goya, Sorolla, Picasso, Dali and Miró.

If you happen to be near the Museum on a Thursday evening, don´t miss The Alcayata Project, a Community Arts event which takes place each Thursday outside the Museum entrance (21:30 hours). All welcome. Check listings for cultural highlights and much more. As the Asturians say: “Ye lo que hay!”To see why people in Oviedo are so happy , watch this promotional video from the Oviedo City Hall.

This article was written by Samantha Chappell who lives in Oviedo and is a true lover of the city.