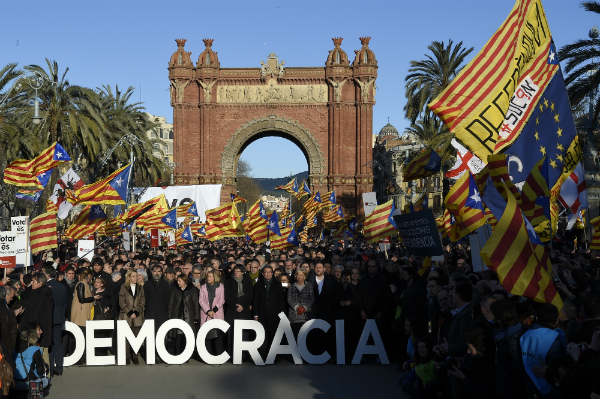 The trial has stoked pro-independence sentiment in the wealthy, northeastern region of Catalonia at a time of high tensions between the local separatist government and Madrid.

Shouting “independence, independence”, “down with Spain's justice system” and “we want to vote,” several thousand Mas supporters gathered on a large palm tree-lined avenue next to the courthouse where the trial of the ex-Catalan president and two former associates began.

They are accused of serious civil disobedience and misconduct for having organised a symbolic, non-binding referendum in November 2014 despite a ban by Spain's Constitutional Court, which deemed it illegal.

Prosecutors want them banned from holding public office for nine to 10 years, but their defence argues they were merely defending “the right to freedom of expression” of Catalans, many of whom want a say in the future of their 7.5-million strong region.

“We are determined to go forward. We did what had to be done in 2014 and we would do it again if the circumstances allow it again,” Mas told a press conference in Barcelona on Sunday. “We are defending the cause of democracy, (which) is a universal cause … We have been very firm to allow the Catalan people to vote. That was our duty, our responsibility and our aim.”

Catalonia, a region with its own language and customs, has long demanded greater autonomy.

But in recent years, tensions with Madrid have markedly increased, as have calls for outright independence, culminating with the election in 2015 of a pro-independence government backed by a majority separatist parliament.

A watershed moment was in 2010, when Spain's Constitutional Court watered down a special statute awarded to Catalonia in 2006 under the Socialist government, giving it more powers.

Supporters of independence slammed what they said was “judicial harassment” and asked for a referendum similar to the one organised in Scotland in 2014.

After the Constitutional Court banned that, Mas and his associates held the non-binding vote for which they are on trial.

Catalonia's current government has promised to hold a referendum in September – a binding one this time, with or without Madrid's consent.

But how exactly it will go ahead is unclear, as the conservative government of Prime Minister Mariano Rajoy insists that this type of local,  one-region-only referendum is unconstitutional, and has vowed never to allow it.

This week, reports emerged in several national dailies that Madrid was considering drastic measures to stop a vote, such as closing schools where polling booths could be set up or taking control of the police, which is normally managed by regional authorities.

The government neither confirmed nor denied the reports.

The Catalans themselves, meanwhile, remain divided – 44.9 percent want independence while 45.1 percent don't, according to a poll conducted by a Catalan public institute.

A large majority, however, wants a referendum.