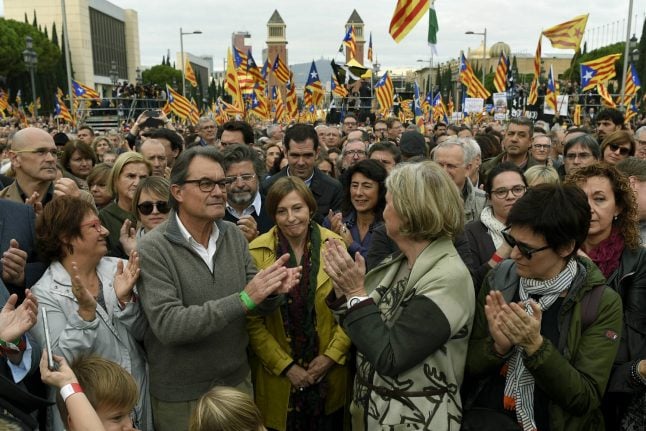 Former President of the Catalan Government Artur Mas (C-L) at a demonstration in Barcelona in November 2016. File photo: Lluis Gene/AFP
Supporters of independence for the wealthy, northeastern region say they hope to draw at least 30,000 protestors on the large avenue next to the Barcelona court Monday morning.
Inside, Mas – who was president of the semi-autonomous region from 2010 to 2016 – his former vice-president Joana Ortega and Irene Rigau, the official once responsible for education in Catalonia, will face accusations of “serious civil disobedience” and “misfeasance”.
Prosecutors want them banned from holding public office for nine to 10 years for having organised a symbolic, non-binding referendum in November 2014 in public schools, despite a ban from the Constitutional Court.
Their defence argues they were merely defending “the right to freedom of expression” of Catalans, many of whom want a say in the future of their 7.5-million strong region – be it for or against independence.
More than 80 percent of those who cast their ballot in the 2014 vote did so for independence – although just 2.3 million people out of a total of 6.3 million eligible voters took part.
“On February 6, it is those 2.3 million people who will be on trial,” Mas said Friday.
Faced with a pro-independence movement that refuses to die down, the conservative government of Prime Minister Mariano Rajoy insists that this type of local, one-region-only referendum is unconstitutional.
The fight for greater autonomy, or independence, for Catalonia, a regionwith its own culture and language, has for decades soured relations with Madrid but the clash has worsened over the past few years.
A watershed moment was in 2010, when Spain's Constitutional Court watered down a special statute awarded to Catalonia in 2006 under the Socialist government, giving it more powers.
Supporters of independence slammed what they said was “judicial harassment” and asked for a referendum similar to the one organised in Scotland in 2014.
After the Constitutional Court banned that, Mas and his associates held the non-binding vote for which they are on trial.
Then in 2015, a coalition of separatist parties won regional elections, promising to steer Catalonia towards independence in 2017 and to organise a “real referendum” which is planned for September, with or without Madrid's consent.
“We are more than ready,” a Catalan government source said this week, requiring anonymity. “If we win the referendum, everything will speed up,” he said.
Madrid, though, refuses to be caught short, and considers that Catalonia is ruled by a “bunch of separatists” who are using independence to hide bad management of the region and corruption.
A probe is ongoing over alleged commissions received by members of Mas's party in exchange for public contracts.
And a week ago, prosecutors launched an investigation into claims made by an outspoken pro-independence senator that the regional government had illegally obtained Catalans' tax records to create a separate treasury – claims he later retracted.
This week, reports emerged in several national dailies that Madrid was considering drastic measures to stop a referendum, such as closing schools where polling booths could be set up or taking control of the police, which is normally managed by the regional government.
The central government is also banking on the 100,000 civil servants in Catalonia whose salary depends on Madrid to refuse to obey orders.
It also has an economic weapon as Catalonia is hugely in debt, and would not be able to finance itself without the central state.
The Catalans themselves, meanwhile, remain divided – 44.9 percent want independence while 45.1 percent don't, according to a poll conducted by a Catalan public institute.
A large majority, however, wants a referendum.