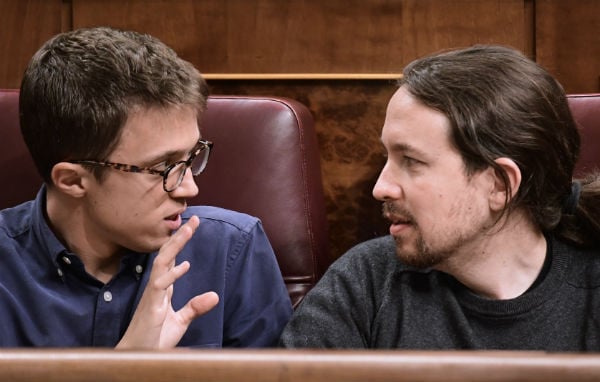 But now Podemos chief Pablo Iglesias and his deputy Íñigo Errejón are engaged in a high-profile duel over how to steer the party towards taking power that will culminate on February 11th -12th at a key congress.

Iglesias, 38, and his 33-year-old political secretary start their separate campaigns on Saturday ahead of the congress which will vote a new leadership council in, and may see one of them evicted from their post.

When they first met at the cafeteria of Madrid's Complutense University in 2003, they were far from imagining that in 2014 they would co-found an anti-austerity party along with other academics that would become Spain's third political force less than two years later.

“I had been told about a young, very intelligent guy who looked like he was six, when in fact he was 19,” Iglesias said in 2015, joking about his deputy's famous baby-face looks.

From there began years of “rare intellectual complicity”, according to Iglesias, until their very public fall-out last year, propped up by relentless tweets and interviews on either side.

Ironically, in his 2011 thesis on Evo Morales's left-wing party in Bolivia, Errejón thanked Iglesias, “a comrade with a sharp mind and Bolshevik drive”  who had taught him about “the art of war” and how to practise it “methodically and with persistence.” Enric Juliana, a journalist at Spain's conservative daily La Vanguardia who knows both well, describes them as “strong personalities” gearing up for a “Machiavellian congress.”

“Errejón doesn't just settle for being deputy, he isn't an assistant who accepts this role and has the patience to serve the leader” he says, describing him as quietly calculating.

“Iglesias is direct, sometimes abrupt, he attacks head-on,” adds Juliana, saying he “paved the way” for Podemos to happen.

“But at times he struggles to control his character, he has a commanding spirit.”

Iglesias is the only child of a health and safety inspector and union lawyer, brought up in a working-class district of Madrid.

Strongly politicised from an early age, he became a member of the youth organisation of Spain's Communist Party aged 14.

Charismatic, the pony-tailed Iglesias embodies the meteoric rise of Podemos, which after two general elections now has 71 parliamentary seats as part of a left-wing coalition with former communists Izquierda Unida.

A formidable debater, he has sometimes shocked with his ferocious attacks on the Socialists, which Podemos wants to replace as Spain's main left-wing force.

Errejón grew up in the wealthy suburbs of Madrid, his father a high-ranking civil servant, his mother stay-at-home – both left-wing activists. Their end-game remains the same — to challenge the ruling regime and the European Union's austerity policies, says political scientist Jaime Pastor, who was a professor at the Complutense and is close to Podemos.

“They both also want (Podemos) to rule” by winning the next general elections, he adds.

But they disagree on how to get there, particularly since Podemos appears to have lost steam since elections in December 2015 saw them unseat the traditional two-party system.

Errejón questions his party's alliance with Izquierda Unida, wants Podemos to be more open, talk to the Socialists and continue to struggle for change – but from within parliament.

Or, as he sums up, stop being the “'enfant terrible' of Spanish politics.”

But Iglesias wants little to do with the Socialists, believing Podemos must not only work from within parliament, but also go back to the streets and shake things up as a protest party.

Juliana does not believe Podemos will split up after the congress.

“But what was a group that conveyed novelty, innovation and audacity could now have morphed into a group of young people fighting.”